Chilika Lake is part of the Tentative list of India in order to qualify for inclusion in the World Heritage List.

Chilika Lake is a brackish water lagoon, one of the largest in the world. It is the most important wintering ground for migratory birds on the Indian subcontinent. Also it is home to more than 150 endangered Irrawaddy dolphins. Chilika Lake, which flows into the Bay of Bengal, is also a RAMSAR wetland. 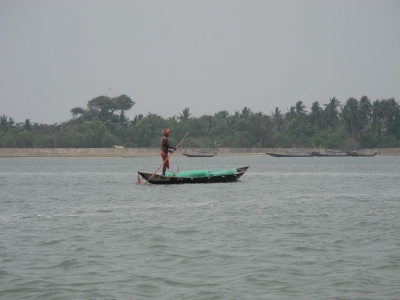 I visited Chilika Lake, the largest brackish water lagoon in India, in 2016. I took a taxi from Puri (important pilgrimage site and popular beach resort) to Satapada. There, you can find a harbour with several tourist boats offering tours on the lake.

Chilika Lake is not a national park, so you should not expect unspoiled nature. The part of the lake I visited was extensively used for fishing. On my tour, I saw only a few birds, but midday in April is for sure not the best time of year for bird watching. However, there were some dolphins (Chilika Lake is home to a population of Irrawaddy dolphins). Unfortunately, it was an unpleasant experience as the tourist boats were chasing and surrounding the animals.

My tour was supposed to make stops at two or three islands (one of them with a temple). The first stop was at a small island that was covered with garbage. There, people tried to sell me overpriced pearls (a common scam). My boatman then “forgot” about the other stops. I was not too bothered by this and happy to return to Satapada after about two hours. Perhaps nowadays the situation has improved, but I cannot recommend my boat trip.

And to be honest, Chilika Lake may be an important wetland, but I do not see the outstanding universal value justifying a World Heritage nomination.