Priorat-Montsant-Siurana paysage agricole de la montagne méditerranéenne is part of the Tentative list of Spain in order to qualify for inclusion in the World Heritage List.

Priorat-Montsant-Siurana is a mountainous region on the slopes of the Serra de Montsant near the Mediterranean coast of Catalonia. The cultural landscape represents a typical Mediterranean polyculture consisting of agriculture, husbandry, silviculture, wine and oil production and mining. Due to its geological and morphological diversity, the area preserved a variety of biotopes and a biodiversity of flora and fauna. 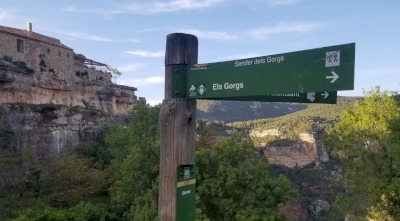 The only reason I review it is because I think it's funny there is an Els Gorge in the park (Catalan for "the" but still). It isn't entirely clear which part of the parks are included and I don't see it as unique enough to be included on the WH list. I mainly came here for hiking around and enjoying the scenery and it should be in everyone's Catalonia trip. The roads are a tad winding but in excellent condition. You won't see a truck along this route. Siruana itself is a worthy stop although the price of the hotel put me off immediately and I only drove up for the sunset. Hard to believe people drink alcohol while relaxing on the cliffs.

I saw plenty of cyclists in the ranges as well. As mentioned already, it's beautiful and a worthy visit but not as WHS. 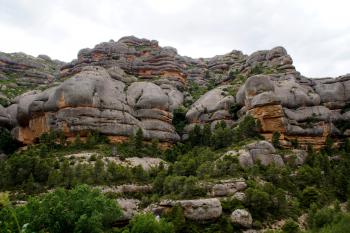 The cultural landscape of Priorat-Montsant-Siurana was registered on the T-list in March 2014, right in time to include it in the itinerary for our Catalonia trip in May 2014. The site is described as a "Mediterranean hinterland landscape with a wide geomorphological diversity" and as an "unique example of the integration of natural, cultural and spiritual heritage" (translated from the French T-list entry). These features are described verbosely but the exact boundaries of the proposed area are not specified, only the size is given with 515 square kilometres. However the title suggests that parts of the Montsant mountains, vineyards and olive groves of the Priorat, and the scenic spot of Siurana are included. So the core zone would be less than an hour from Tarragona by car.

The website of the tourism portal of the Priorat region provides plenty of information on what to do and what to see, suggestions for hiking trails and roads through the vineyards, locations for wine and olive oil tasting etc. We had chosen a few destinations for a day trip from Tarragona. We decided to start with a short hike in the Montsant mountain range, a route named "The Soul of Montsant" that promises a view of characteristic rock formations - and we were not disappointed. The hiking trail starts at the parking lot at the Sant Antoni hermitage near Ulldemolins. The trail was easy, about six kilometres one way, and no large differences in height. After two kilometres we came to the first scenic spot, the deep gorge of Cadolles Fondes. From this point the narrow valley is flanked by fascinating rounded rock formations (photo). No wonder that this was a spiritual place for the medieval people and that they named it Montsant - Holy Mountain. At the end of the valley is the small Eremita de Sant Bartomeu, the oldest hermitage in the Montsant. After a short rest we went back on the same route.

Then we drove to Siurana, a small hamlet that stick on top of a steep rock. It was the last Moorish fortification in Catalonia that was reconquered in the 12th century. Today, it is a popular tourist spot, you can wander around the few old houses, visit the Romanesque church, and enjoy the panoramic view of the river valley and the surrounding mountains. Our last destination were the ruins of the Carthusian Monastery of Santa Maria d'Escaladei. It has a nice location between vineyards and in front of the Montsant mountains. For some unknown reason the monastery was closed, but we could overlook the place from the surrounding path and I think, we have not missed much.

Then we headed south, when possible we took narrow roads through the hilly countryside and through small villages. The landscape consists almost entirely of vineyards and olive groves, often side by side on the same hillside. But neither the agricultural landscape nor the rural architecture are exceptional compared to the wine regions that are already on the WH list or to cultural landscapes like the Causses and Cevennes in France. After some detours we arrived at Falset, the main town in the Priorat. We bought olive oil and some bottles of wine at the Falset Cooperative Winery (Agrícola Falset Marçà). The olive oil was excellent, but we had less luck with the wine. The Cooperative is in a nice building in Art Nouveau style, one of the so called "Catalonian Cathedrals of Wine" (another one is in Cornudella de Montsant). Unfortunately we missed the guided tour.

All in all we enjoyed our day trip, in particular the natural values of the region. But should it be a WHS? I would say no. Maybe just because vineyards and olive groves are so common in the Mediterranean and in Central Europe, so I may underrate the approach of the interaction of natural, agricultural and religious heritage. But these characteristics can be attributed to most European wine regions and I've seen nothing in the Priorat, that I've not also seen at other WHS.

Withdrawn by Spain after ICOMOS advice not to inscribe