Les Mausolées Royaux de Numidie, de la Maurétanie et les monuments funéraires pré-islamiques (Tunisia) is part of the Tentative list of Tunisia in order to qualify for inclusion in the World Heritage List. This site (or parts of it) has already been inscribed under Dougga/Thugga WHS.

The Royal Mausoleums of Numidia, Mauretania and pre-Islamic funerary monuments show the exchanges of influence between the native Maghreb civilization and the Phoenician-Punic civilization or the Hellenistic-Egyptian ones. The proposal comprises a series of 5 examples of funerary architecture across Tunisia. The Numidian civilization covers a historical period from the end of the 2nd millennium BC to the 2nd century AD. 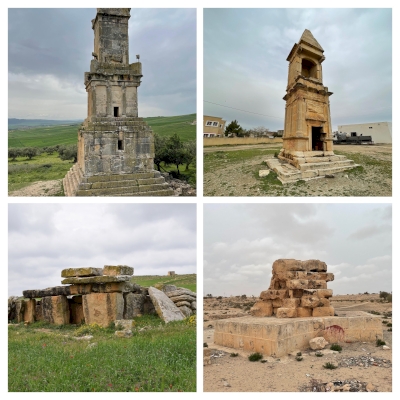 On our April tour of Tunisia, we wanted to visit several TWHS’, but there wasn’t time in our schedule to visit them all. Thus, we had to choose between the 16 of them. Visiting Djerba we visited the mausoleum of Henchir Bourgou as a part of the TWHS Djerba, unconsciously we also started our Nubian mausoleum journey. The community likes for this site is a 100%! Although it’s only four votes, still a 100% is overwhelming. There are 5 elements in this nomination, and we suspect the community judgement is based on only one element, the one in Dougga. We managed to visit four elements, and did they live up too the requirements and expectations of our community?

The mausoleum of Henchir Bourgou is a very disappointing visit (lower right picture). Visually it’s almost like a pile of rocks on slightly more visual base in then semi-desert landscape with a lot of garbage around. This one is not worth an inscription, not even as a part of this serial nomination

Northbound from Djerba we were going inland Tunisia and chose to visit two more locations before visiting Dougga. First of these two were the mausoleum in Makthar. Makthar is an archaeological area (with a small museum) and we just assumed the mausoleum was inside the archaeological area. The site would open at 8 a.m. but when we arrived around 9 a.m. the gate was closed and not as soul in sight. After circling the area, taking some pictures from the outside, we passed by the entrance again, and now it was open! Ah – Ramadan opening hours from 09:30!
The area consists of roman and byzantine remains, but in one corner we found something that seemed to be a funeral monument. Big stone slabs laying on top of stone walls, making it something like a burial chamber. It was marked as Megalithic. This could be it?

Back at the entrance/exit the newly arrived “guide” knew we were searching for mausoleums or funral monuments, so he told us to come with him – outside det archaeological area. Some 50 m from the entrance there are one small monument and then he sent us further 1 km the other direction to a third one (upper right picture). The latter was a typical “tower mausoleum” we have seen pictures of.

The third site we finally found was the megalithic tomb in Ellès (lower left picture). It’s a series of tombs scattered around the small town of Ellès.  They were more like the burial chamber in the archaeological area in Makthar. Not sure if we had found the correct site, we had to read us up once more, then we decided that this was it. With the lack of an expected tower, it’s little disappointing but not too much.

Arriving at Dougga/Thugga we could finally visit our fourth, the Numido-Punic mausoleum at Dougga (upper left picture) and could see why everybody liked this TWHS. Not too different from the last one in Maktha but placed nicely in the terrain which can be overlooked by the Dougga hilltop.

Not having visited the numidian Necropolis of Chimtou but by its description we can conclude there are two very visual sites (with tall monuments) and three less grand. Our overall impression is – a bit ambiguous. Maybe some of these elements could be skipped? Then we would say - go for it, Tunisia!

After visiting Djerba by car going inland there is no problem visiting the rest of the sub-sites. We didn’t try to figure out if any public transport was feasible, but as the Djerba sub-site is far for from the others and it’s not a very good one, it would be better to focus on the northern ones. It might be easier to find public transport to Makthar and Dougga.