Kaboud Mosque is part of the Tentative list of Iran in order to qualify for inclusion in the World Heritage List. This site (or parts of it) has already been inscribed under Tabriz Bazaar WHS.

Kaboud Mosque is a turquoise-colored Timurid structure in Tabriz. It has a double layered dome. It dates from 1465. The mosque was severely damaged in an earthquake in 1780, leaving only the iwan (entrance hall). 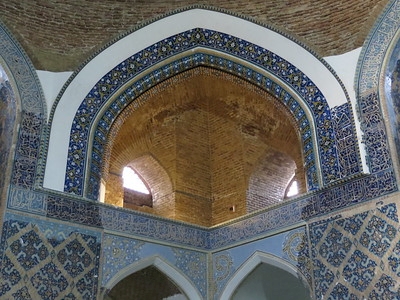 Within the already incscribed Tabriz Bazaar complex also lies the ‘Blue Mosque’ (which also mysteriously still features on Iran’s Tentative List as Kaboud Mosque). Looking at the UNESCO map it seems indeed connected to the Grand Bazaar, but in practice it requires a taxi ride from the bazaar to get to this mosque. Its renovated brick backside faces the main street, but when you walk around it a monumental gate like that of the masterpieces in Uzbekistan appears.

Both the exterior and interior tiling contains special calligraphic texts and geometric symbols that are not common for mosques. A series of swastikas from Zoroastrian Persia can be found for example.