Zone Giraphe is part of the Tentative list of Niger in order to qualify for inclusion in the World Heritage List.

The Giraffe zone is an area where last remaining population of the West African giraffe is protected. Some 600 survive, having recovered from only 49 individuals in 1996. As the zone is an integral part of the W Park Biosphere Reserve, it may be put forward as an extension to the W-Arly-Pendjari WHS. 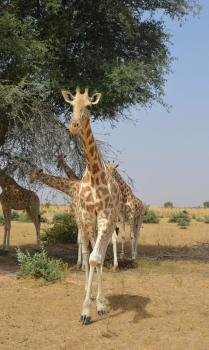 Until the 1960s, before persistent drought and population growth, the West African giraffe ranged widely throughout West Africa. The last self-sustaining herd can be found an hour east of Niamey at the Kouré Giraffe Reserve, which I visited in November 2017. From a low of around 50 giraffes in the mid-1980s, the herd is estimated to number more than 400. I found 15, which were easy to approach on foot.