Mothia and Lilibeo Island: The Phoenician-Punic Civilization in Italy is part of the Tentative list of Italy in order to qualify for inclusion in the World Heritage List.

Mothia Island and Lilibeo are a pair of Phoenician-Punic colonies in western Sicily. Mothia was found on the island of San Pantaleo at the end of the 7th century BC, and was one of the most prosperous Western Phoenician colonies, until it was sacked in 397 BC. Over one thousand carved steles have been discovered at Mothia, undoubtedly the most significant evidence of Phoenician Punic sculpture. Lilibeo was built by survivors on a nearby peninsula, and developed into the most important military stronghold in Punic Sicily, before later prospering under Roman, Arab and Norman rule. 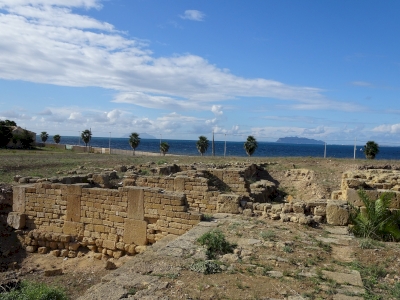 I visited Lilibeo, which is an archeological area in Marsala at the westmost edge of sicily. It is easier to reach than Mothia, as there is no ferry needed. Despite the title of this TWHS, Lilibeo is not an island. The site comes with a nice little museum, but doesn't seem to be too popular. The main claim to fame is the long history reaching back to phoenician and punic settlements, and the official description heavily points to these otherwise underrepresented civilizations. However, there are actual not many artifacts from punic times visible on site. There is a large area with various excavations, but most are from roman or medieval times. There are remains of the city wall, a roman road, remains of the roman city buildings, and various tombs from later periods. However, I couldn't point out anything that told me something about the phoenician/punic times, and I left the area without having learned anything about them. The museum exhibits are better in this regard, as there are remains of two punic ships on display, but these have not been found on this site.
So what's the bottom line ? Overall, it was a nice visit. The museum was in a good shape and had some interesting finds. The archeological area seemed a bit disheveled, with bleached-out signs and other maintenance problems. Still, walking around ruins is always fine with me. However, in my opinion, the whole site falls strictly into the 'nice, but not WHS material' category. The phoenician/punic links are too weak, and the whole site is not a very spectacular visit. The nearby (but non-WHS) archeological sites of Segesta and especially Selinunt are of similar age, but have both much more to offer for a visitor.
Visited in October 2021.
Importance:3/5 Beauty:2/5 Uniqueness:2/5 Environment: 3/5 Experience:3/5 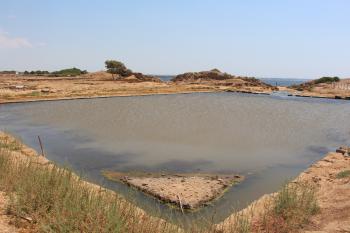 Mothia is a Phoenician settlement on the tiny island of San Pantaleo, just off the coast of Sicly between Marsala and Trapani. It’s signposted from Marsala as “Mozia” and easy to find, if you stick to the road along the coast. The boat ride (currently 5 EUR return) takes about 10 minutes. There is an extra fee to step foot on the island (9 EUR).

The traces of the settlement can be found along the shore. It takes about 40 minutes to walk around the island. Not really much is left. The once mighty walls and everything else is reduced to a few stones. Most remarkable is the Cothon with an artificial pool. Further, there is a small but interesting museum with artefacts found on the island.

Exploring the island was fun, despite the 40 degrees Celsius, but rather for the island itself and not the archaeological remains. I’m not sure if this site will make the list. Not much is left and what’s left is not very impressive. There is a reasonable chance though, because Phoenician sites are not overrepresented so far.