Yapease Quarry Sites is part of the Tentative list of Palau in order to qualify for inclusion in the World Heritage List.

Yapease Quarry Sites is a transnational proposal consisting of two mines in Palau where a megalithic currency—the world’s largest—was quarried, and two sites on the island of Yap in Micronesia associated with the use of the currency. The two quarries in Palau, Uet el Daob ma Uet el Beluu and Chelechol ra Orrak, are located on the limestone island of Korak, just offshore from the southern coast of Palau, and were begun in the 19th century after the Yapese earned the right to quarry in Palau through bartering and the formation of alliances with villages in Palau. The quarries contain rock carvings and artifacts, including completed and unfinished disks, demonstrating how the stone money was formed, as well as human remains dating to more than 3000 years in the past. 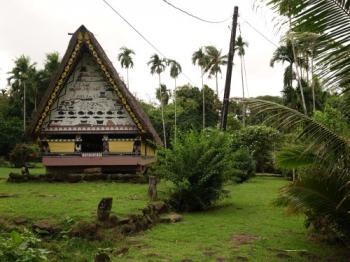 Orrak is a tiny island, which was connected to Airai Village in Babeldaob “by a prehistoric causeway constructed of coral rubble now covered in mangrove vegetation”. From the harbour of Airai this causeway is still visible, although it’s also easy to see that it is broken down by water in one or two places.

The Yapese did not just go and take the stone disks from Palau: they had arrangements with the traditional owners of the lands for the quarrying rights, and brought gifts from the chiefs of Yap to the chiefs of Palau. In the case of Orrak Island, this meant the chiefs of the village of Arrai. In its evaluation, ICOMOS argues that there is at least an intangible relationship between the quarry sites on Orrak and the village of Airai. Therefore the village itself could be part of the revised nomination or at least the buffer zone.

On my first day driving around Babeldoab, I checked out Airai too. It has probably the finest example of a traditional bai (men’s meeting house) of Palau. 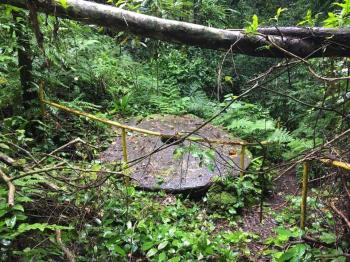 I reached only one site from Yapese Stone Money Quarr - Chelechol ra Orrak, they call it Metuker er a Bisech. The site is located in a small island belonging to Airai State. At the time I was there, only one tourist agent was organizing 2-hour trip to the site (it could be shorter or longer depending of your climbing skills). I do not remember their name, but it is easy to find them because the office is located just under the big bridge connecting Koror to Babeldaob (the big island); it'll be on your left hand side when you drive from Koror - just cross the bridge and then make a U-turn, choosing the road that goes under the bridge; this is the last building on your right now.

You will hear that at least two people are needed to organize a boat for that trip, but if you insist and show how much you'd love to see "this unique Palauan treasure" they do it only for you. That's what happen to me; we agreed the day, the time. The price is fix: 35 USD for the trip plus 25 USD for kind of a permit to visit historical places in Airai state. If you have paid it already in Airai State Office, you'll just have to pay only for the tour.

After 25 minutes boat trip you land at a provisional harbour, and then you have to climb up for another 20 minutes. The path is steep, but marked with a yellow handrail, sometimes broken. As this is a jungle and not many people are visiting the site, you'd better have good shoes and long trousers. When I was there the humidity reached almost 100%, lots of small insects in the air and on the ground, so it was not very pleasant experience but worthy! Don't count on a guide! The man who brought me there stayed in the boat. There are some informative boards, but old I think and it was really difficult to see any explanations.

First you reach an example of a big stone money that was broken when transported from the quarry, that's why they left it here. It is surrounded by a yellow fence. It is really big! And it is here that I started wondering: why? why they were doing it? If you follow the yellow handrail (there is no visible path anymore, so go through the bushes and fallen trees) for another 10 minutes, you'll reach the quarry itself - just two big caves one opposite the other. There's another info board illustrating how the whole process looked. And if you follow the yellow handrail for another 20 minutes, going up, very steep (no trace of a path at all, I had the impression it was longer), you can see one more big money, unfinished.

Then I got back to the boat and we came back to the starting point (the office). My boatman showed me some relics from WWII, some mussels farm and also one cave we got into. And that's it.

As transnational site with Micronesia