Port of Banbhore is part of the Tentative list of Pakistan in order to qualify for inclusion in the World Heritage List.

Banbhore is the ruined town of the medieval port of Daibul on the north bank of Gharo Creek, about 65 kilometres east of Karachi. The city was inhabited from the 1st century BCE to the 13th century CE and the remains date from the Parthian, Hindu-Buddhist and early Islamic periods. The port was abandoned when the Indus River shifted its position and the creek silted. The archaeological site includes a citadel, the remains of an early stone-built mosque and the region’s best preserved mediaeval port.

Map of Port of Banbhore 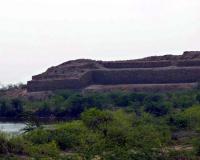 Banbhore is an archaeological site of an Indus port which existed, certainly between 100BC and 1200 AD, though may go back to Alexander the Great at c325BC. The site is remote from any town and the visible excavated remains are not spectacular – just a large “tell” with some partially reconstructed city walls and, inside, a few further low walls to show the shape of some buildings and streets. No pillars, arches or decorations – you will have to use your imagination! It reminded me very much of Khor Rhori not that far away across the Arabian Sea in Oman. Both were ancient port cities with relatively few visible remains and overlooking a stretch of water – though, in the case of Banbhore this is little more than a creek today with the silting up of the Indus delta and the consequent loss of easy sea access probably being a major reason for the town’s demise

To help understand the site it is well worth starting with the surprisingly good little on-site museum from the 1960s. It contains a reconstruction of the stratigraphic sequence across 23 levels of habitation which have been uncovered since excavation started in 1958. Hindu, Buddhist and Muslim artefacts are on display showing the changing nature of the societies occupying the site. Among these are a pot clearly marked with Chinese characters showing that Banhbore was part of the silk route trading system. Banbhore is also thought (though, as I understand it, not definitely proven) to be the town of Debal where the Muslim invasion of the Indian sub-continent by the Ummayads took place in 710. One “building” whose remains are clearly marked within the site is that of the mosque – which is said to be the first erected in the subcontinent. Its lack of a Mihrab and an inscription shows its extremely early date of 727 (However the Cheraman Juma Masjid in Methala, Kerala, India claims to date back to 629). The city after this point clearly became divided into Muslim and Hindu quarters. We passed a pleasant couple of hours divided approximately equally between the Museum and a walk around the site – up through its landward entrance and partially reconstructed walls (photo), through the exposed streets past the mosque (and indeed one small area of plastered wall (semi) protected by a covering and on to the seaward entrance where the port would have been. Vast areas of the site are unexacavated and one suspects that there is much more of value to uncover.

Unlike other sites in Pakistan one can’t say that the site is “degrading” as there isn’t a lot exposed to degrade – but equally it didn’t look well cared for with rubbish and part completed (or ruined??) admin buildings/rest houses/cafes/toilets being highly visible. The most significant new thing we saw was a plaque dated 7 March 2013 which said (verbatim) - “The project of the protection, preservation, promotion and development , including preparation of Master Plan of Banbhore Archaeological remains was conceived, planned and executed under the supervision of and was duly launched by Motarma Sassui Paluji Minister of Culture Sindh along with Mr Abdul Aziz Uqaili P.I.S Secretary to Government of Sindh Culture Department”. They must have ordered a job lot of such plaques as we saw them at other sites too!! So, we await progress on the preparation of this Master Plan and subsequent actions envisaged by it – whatever they may be! As I identified in my Forum post on Pakistani WHS, there was a devolution of responsibility for cultural matters to Province level (in this case Sindh) back in 2011 so, no doubt, they have been getting their act together on these matters. This report in Pakistan’s main “quality” newspaper in English (“Dawn”) reported on the meeting which must have accompanied the unveiling of the plaque and seems vaguely optimistic, but perhaps more in hope than in belief - http://dawn.com/news/702453/bhambore-ruins

Banbhore’s 2 main claims to fame would appear to be its role in the Silk route and in the bringing of Islam to the sub-continent. India has placed a number of silk route sites on its T List, but the Pakistani text on its T List presentation for this site doesn’t mention this aspect and concentrates instead on the claim that it represents “the best preserved early Islamic urban form in South Asia and the regions best preserved mediaeval port”. My guess would be that the site could have the potential for inscription but that it is a very long way away from being able to do so.