The Historic City of Thula

The Historic City of Thula is part of the Tentative list of Yemen in order to qualify for inclusion in the World Heritage List.

The Historic City of Thula is an extremely well-preserved village near Sana’a that was first constructed during the Himyarite period, between 110 BCE and the 6th century CE. The medieval town that followed was built at the base of a cliff and consisted of three to five story houses separated by narrow lanes and enclosed by a city wall with multiple watchtowers and gates. The city includes mosques, mausoleums, the former Imam’s palace, a souk, pools, and hammams, all built in a similar style out of stone.

Map of The Historic City of Thula 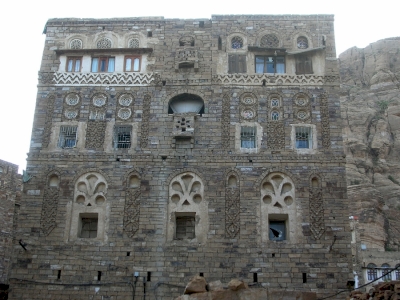 Unintentional visit Feb 2007. I hadn't set out to specifically visit Thula but while at the rock palace of Wadi Dhahr I was offered a ride with an American woman who had hired a car and driver for the day. We were taken to Shibam (not the more famous one in the east), Kawkaban (worth a visit if in the area, it is built on top of a cliff with great views) and Thula. Thula was our last stop, it had started raining and the driver anxious to get back so we didn't have much time to explore. Unlike villages in many other regions of Yemen, homes in Thula were made of stone instead of mud and overall were in a much better state of preservation than elsewhere. Great stylistic elements especially on the windows as seen in the photo.

The Historic City of Thula (T)