Le chemin de fer de Cerdagne is part of the Tentative list of France in order to qualify for inclusion in the World Heritage List.

The Ligne de Cerdagne, also known as ‘Le Petit Train Jaune, is an electrically operated narrow-gauge railway in the Pyrenees, which was built between 1903 and 1911 to connect the Cerdanya Valley to the French railway network. The line is 63 kilometres long and climbs to an altitude of 1600 meters. The train connects Villefranche-de-Conflent with Latour-de-Carol. About halfway along the line is the Mount-Louis station, making the Petit Train Jaune a direct connection between two sites of the WHS Fortifications of Vauban. 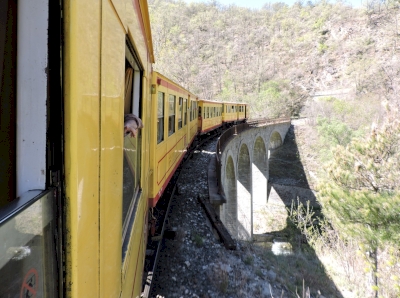 We took a trip on the Petit Train Jaune as far as the WHS of Villefranche-de-Conflent in April 2017. The timing was somewhat out of season, meaning not only were there very few passengers, but also that the train wasn’t running from Latour-de-Carol but instead from Font-Romeu-Odeillo-Via. Confusingly, the end stop is not called Villefranche-de-Conflent, but Villefranche-Vernet-les-Bains.

We had arrived driving across the border from Andorra through a tunnel. Entering the tunnel, the evening was sunny, bright and dry - exiting the tunnel in France a few minutes later, it was foggy and covered in snow! Before our overnight stay at Ur, we stopped off at the train station in Latour-de-Carol to procure information about where to get the train the following day. We had to do this as, despite many hours online research and Google Translate, the SCNF railway company’s website proved impenetrable to organising the trip in advance. A printed timetable at Latour tipped us off that the train would depart the following day from Font-Romeu (better known as a ski-resort) shortening the journey from 62km to 32km.

However, there would be no return train and instead we would return via an hour-long bus for the seemingly incredible price of one euro. This would leave us back in Font-Romeu outside the Tourist Information office, whereas the Little Yellow Train Station was almost 5km away. So in an unusual move for us, we went to the Tourist Information Office to figure out what to do. They told us to park for free in a multistorey opposite and gave us a number for a local taxi to the station - my wife’s best school French getting a run out. This is one of only a handful of times we have ever gotten a taxi while travelling. Tickets were then purchased at the station, which had the train standing waiting for us on the platform.

The three-carriage-long Petit Train Jaune was indeed yellow. It being April, the wagons were closed but I believe there are open ones available in the summer. More people probably turned out to view the train pass than were on the train with us. It chugged along with the Pyrenees in the near-distance, past many sleepy closed stations. A lot of the stops are request only, although I’m fairly sure we stopped to pick up two travellers who were just on the road and not at a station at all!

This century-old hydro-electric powered line runs along the River Tet, involving an ultimate descent of 1166m from its summit to the final stop (in the direction we travelled). The list description refers not only to its age but to the technical characteristics used to negotiate the steep route. Among these are 19 tunnels, one of whom we went through was over 300 metres. But the standout features are the two bridges - the Sejourne Viaduct and the even more impressive Pont Gisclard. Crossing the river 80 metres up, it was the first metal railway bridge in France and unusually for a railway bridge, a suspension bridge. Either the hydro-electric aspects are not too visible from the train or your eyes have to be peeled - either way I don’t remember any.

Thankfully the day was clear and sunny as we passed through a mix of open country, woodland and hilly river valleys before arriving at Vauban’s fortifications in Villefranche-de-Conflent. The scenery along the way it has to be said was “solid but not spectacular”. Journey time was something like 1 hour 45 minutes or so.

Does it belong on the World Heritage List? There are some similarities with already inscribed railway systems, admittedly not having travelled to most of them. Having said that, it’s not as long as the Trans-Iranian Railway, as old as the Semmering Railway, as steep as the Mountain Railways of India, as technical or as scenic as the Swiss Rhaetian Railway, nor as spectacular as the set-piece Forth Bridge. It was a nice trip, but no real “wow” moment for me.