The Historic Centre of Cajamarca

The Historic Centre of Cajamarca is part of the Tentative list of Peru in order to qualify for inclusion in the World Heritage List.

Cajamarca is a colonial city that bears witness to Spanish culture in the Andes and its domination over the Incas. There are historic buildings built of adobe and volcanic stone. The city also has many archaeological sites on the outskirts, including ceremonial centres, some dating from the pre-Inca period.

Map of The Historic Centre of Cajamarca 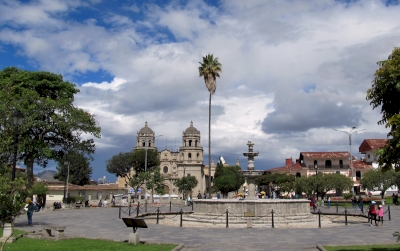 Unesco's description for Cajamarca refers to Spanish-Andean culture and architectural styles spanning the 16th to 19th centuries without specifically mentioning any specific places. It then goes on to list several unrelated pre-Columbian temples and some hot springs scattered about outside of town that don't really fit into the title of the proposed site.

Unfortunately we only had half a day to visit Cajamarca and I was feeling particularly unwell so we limited ourselves to the small historic centre. Without the energy to truly appreciate what we were seeing I can say that although it is small, we quite liked Cajamarca and found it to be architecturally unique from the other colonial Spanish centres in Peru and not just a smaller copy of the same stuff. There are 2 churches on the Plaza de Armas, both with nice detailed facades which reminded me of the facade of the Basilica de San Francisco in La Paz.

In addition to the rich pre-Columbian cultural history in the surrounding valley (as is so common throughout Peru), Cajamarca is most famous as the site of the Spanish capture and execution of the last Incan emperor, Atahualpa. The only remaining Incan site in town is a small room that was supposedly the place where Atahualpa was held and offered his famous ransom of gold and silver. There isn't much to see other than a small room, but the cheap (5 soles) tourist entry ticket includes entry to the nearby Belen church and small ethnographic museum.

A short but steep climb uphill from the Plaza de Armas will take you to the Santo Apolonia hill for a look out over the town and valley as well. The so-called Seats of the Inca there were not as impressive as the views and are pre-Incan anyway but still worth the effort.

Overall, we found the city to be very clean and pleasant, and although a half-day was more than enough to see the central sites, I wish I'd had more time for the area simply to relax. It was the most friendly and least chaotic place we visited in Peru. I would not object to its entry onto the List though it will need to figure out exactly what it is nominating first.

The Historic Centre of Cajamarca (T)