Historic Town of San Sebastian del Oeste is part of the Tentative list of Mexico in order to qualify for inclusion in the World Heritage List.

San Sebastian del Oeste is a 17th century gold and silver mining town. It has an urban plan strongly influenced by the topography and an architecture characterised by winding cobbled streets and plastered brick and wooden constructions. It is surrounded by abundant natural wilderness and bears witness to its adaptation to it. 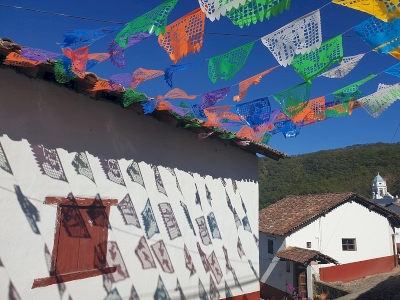 I visited this tWHS as a stopover en route from Tequila to Punta Mita, Nayarit. Being just a slight detour, albeit adding several hairpins in a protected natural environment (on the way I spotted a coyote which probably was the only highlight of the day) and a few extra kilometres on cobbled streets which are mentioned in the nomination description, I sacrificed half day at the beach to explore the Historic Town of San Sebastian del Oeste in the western part of Jalisco.

Like Zacatecas, Guanajuato and Taxco, San Sebastian del Oeste (also a Puebla Magico) is a 17th-18th century gold and silver mining town. It is very small in comparison and it is set in a very rural setting in the Sierra Madre Occidental with several residents using horses as their main mode of transport along the few uphill and downhill cobbled streets of this quiet town. Distinguishing architectural features of this town, also mentioned in the nomination description, are the few white and red plastered brick and wooden constructions of this "pueblo minero". The best constructions which are still standing are those around the main square and the white church with light blue details, dedicated to the town's patron saint San Sebastian Martir. Most houses have small balconies adorned with bougainvillea adding more colours to the overall white and red atmosphere. I also diligently visited the tiny municipal hall to check out the two prison cells I read about in one of the many information boards in English and Spanish.

Just before leaving the town, I also passed by the old cemetery full of mosses which is quite a long walk away from the town proper. Perhaps its most interesting feature is that it is located on an ancient volcano and preserves five overgrown maosoleums of rich and important people of San Sebastian del Oeste's wealthy past. I visited the house-museum of Donna Conchita and the Encarnacion family of miners with family photos and several objects from their ancestors.

Last but not least, I enjoyed watching locals arriving on their horses and having micheladas at La Barandilla, with strange additions to our beer such as cucumber, jícama, worcestershire sauce, hot spices and even shrimps. My better half would have preferred spending more time at the beach and for what we saw, given the detour and effort, I don't blame her at all! I failed to appreciate any OUV and it only served as a quick peek at how most rural towns must have looked like in bygone days.