Paysage culturel d'Azougui is part of the Tentative list of Mauritania in order to qualify for inclusion in the World Heritage List.

The cultural landscape of Azougui comprises an oasis and an archaeological site. The oasis had a large date palm grove, which stimulated trade. Azougui was the first capital of the Almoravids, and parts of a dry stone fortress remain. 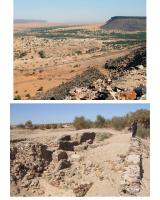 The “Paysage Culturel d’Azougui consists of an oasis of date palms at the bottom of a steep escarpment, a few kms north of the regional capital of Atar up on the Adrar Plateau (Photo 1. We went there because of its stated importance in the history of the Almoravid dynasty. Now, all those N African “id” dynasties are a problem aren’t they! – Idrissids, Zirids, Hammamids etc etc. Among them were the Almoravids. Around 1050 this Berber dynasty “emerged” from the Sahara, driven by Islamic puritanical reform ideals and, remarkably quickly, conquered Morocco, the Magreb towards Algiers, much of Iberia and, to the south, took land from the Empire of Ghana . From this peak in 1120 however they were quickly conquered by the Almohads and had been replaced by 1160. Around 1062 they established Marrakesh as their capital. It was this dynasty’s expansion which El Cid fought. Their architectural style is considered significant for its Puritanism and rejection of lavish decoration. Their long term significance is claimed to include the Islamisation of the Magrheb and the western Sahara (though this is disputed).

But of all this, very little remained in Azougui!! The Mauritanians are no doubt proud of “their” dynasty and understandably revere Azougui within their national consciousness as its birthplace. The T List entry describes it as the “Première capitale des Almoravides”. In its review, ICOMOS is highly sceptical of this claim :- “it seems that Azougui was an Almoravid fort rather than a town at the centre of the expanding state. There does not appear to be evidence to suggest that the emerging Almoravid movement had one focus at Azougui, or that Azougui was in any way a ‘capital’ for the Almoravids, as suggested in the title of this nomination.”. Indeed it does appear that the nomination file rather over-reached itself in this respect :- even the hand-painted notice board at the badly managed/preserved site only claimed that “ici les Almoravides edifierent une forteresse”. And all we saw were some remnants of open excavations (1860, 1922, 1948 by the French West African specialist Raymond Mauny, and 1980) which had unearthered a few unremarkable walls (photo 2) together with a small renovated tomb of Imam Hadrami, an Islamic philosopher who provided guidance in both religion and government to the Almoravid leader Abu-Bakr. Possibly significantly the tomb was only “identified” around 200 years ago!! The nomination also mentioned rock paintings – and we did see some of these some distance away up on the plateau. ICOMOS noted however that no inventory of these was provided with the nomination so we can’t know which examples Mauritania was intending to include.

However, Mauritania’s case was twin pronged and didn’t just rely on the rather limited Almoravid physical remains!! As the title indicates, Azougui was presented as a cultural landscape which was said “to be an exceptional example of a site, which, from pre-historic times to the present day, has played a fundamental role in shaping the landscape of nomads along the Western Trans-Saharan trade routes”. In particular it represents the practice of irrigated date palm oases operated within a semi-nomadic life style by which families returned to the oasis at harvest time. Here too ICOMOS was sceptical and asked for a comparative study and more information. I can’t say that we noticed anything “special” about the oasis compared with many others we have seen across the northern Sahara from Egypt to Morocco. But it may well be that we were unable to appreciate the “special” aspects. There are of course already a number of inscribed date palm oases. The Mzab valley in Algeria comes to mind – which is also an example of seasonal migration around the date harvest. But think how many Vineyard landscapes have been inscribed!!! If there are enough cultural and physical differences between all these to justify multiple inscriptions then who are we, who know little or nothing about “date groves”, to suggest that one set of date groves on the list would seem more than enough to represent this example of human activity!!! Apparently Azougui grows 10 different varieties including black and yellow ones. Perhaps that is indeed enough to demonstrate OUV - after all France only grows red grapes at St Emelion!!