White Mosque in Ramle is part of the Tentative list of Israel in order to qualify for inclusion in the World Heritage List.

The White Mosque is an ancient Ummayad mosque in the town of Ramle, southeast of Tel Aviv. It was built in the early eighth century by the Ummayad Caliph Suleiman ib 'Abd el-Malik. The mosque was destroyed and rebuilt several times. Today, only the minaret and three large underground cisterns have survived.

Map of White Mosque in Ramle 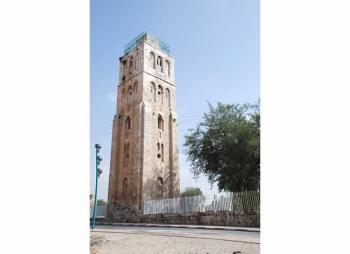 In May 2014, I stopped to visit the White Mosque (really just a tower) in Ramle during a long drive from Nazareth to Masada.

Ramle used to be the Arab capital of Israel during the Middle Ages and is the only town in Israel erected by the Arabs from a scratch. Surprisingly enough, although Ramle used to be entirely populated with Arabs its historic centre remained almost intact after the War of Independence of 1948, unlike many other Arab towns (Tiberias for instance). The White Mosque used to be a major building in the centre of the city but all that remained of it is its Gothic influenced minaret. I don't find it outstanding, I must confess, but perhaps in addition to some other sites in Ramle it might justify an inscription. There are beautiful cisterns, a multitude of old residences, a hamam and a medieval church.

I find it important to add that I find Ramle a terrible miss on Israel's behalf. It has a great touristic potential but is in general in terrible neglect.