Güllük Dagi-Termessos National Park is part of the Tentative list of Turkey in order to qualify for inclusion in the World Heritage List.

Güllük Dagi-Termessos National Park comprises an ancient fortified city on a natural platform on Güllük Dagi mountain. Termessos dates from around the 4th century BC. The Hellenistic ruins of a central square, theatre, temples, and cemeteries remain. 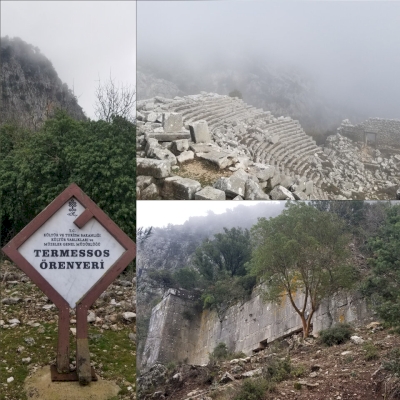 Absolutely stunning. The view from the theater alone is worth the trip. It's not unusual for the theater to have a dramatic view, but this one easily tops other sites.

If you can't drive up to the parking lot yourself (entrance is really cheap) you can take a taxi and let it wait. After a 10 minute drive up without any blindspot mirrors and plenty of honking, you can start your ascend which isn't for the unfit. It will take at least 20 minutes to reach the lower city walls, which a British person would probably call "built proper", and then another 5 minutes to reach the top.

The city walls were built for the ages, real solid. The other walls on the hilltop faired a little poorer but the masonry is still noticably great. The highlight is the theater though, and the signposts lead you there without much deviation. You can take a detour though, to see the Temple of Artemis and some rubble, nothing which is explained or signposted. I would think most people will just go to the theater and maybe hang around at the entrance rubbles, which must have been an impressive town in its haydays, and that's fine because the theater alone is worth all of this. According to the official description there isn't much known about the place so I think that will make inscription for culture a little difficult.

As for the natural part of I don't think that deserves any inscription. They park shelters some endangered species such as the mountain goat (!) and the golden eagle, which you may have luck running into at the hilltops, but I think there is a misunderstanding better needing to protect animals and nature vs universal value. It's great they have protection in the park but that is all that is required. I don't see any other road to visit the park so going to the ruins will be your only way. The mountains provide a much cooler atmosphere at 600m up so be prepared for that. 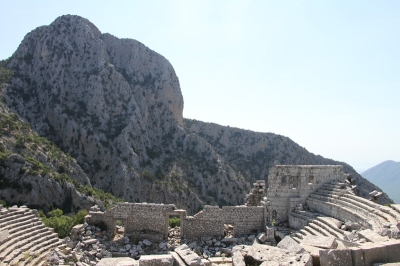 I absolutely loved my visit to Termessos. The ruins of Greek fortified town are located within the National Park, close to Antalya. From the E87 there is a crossroad, leading to the park at the left and conveniently to Karain Cave TWHS to the right.

After the toll booth, where you pay the entrance fee for the park, there is a small road that leads to the parking lot of the ruins. Up at the ruins there was nobody. No guard and no other visitors. I reached the ruins after around 30 minutes hiking. The complete area is huge and the combination between ruins and nature is stunning. I found city walls, temples, cisterns and several other buildings. The highlight is clearly the theatre. It’s not in great shape, but the location on the edge of the mountain is fantastic. As the only visitor, I was fully able to explore the site and get an unspoiled view from every angle.

I walked back a different route, passing several rock tombs on the way down. The complete hike is not easy, but well worth the effort. You should at least plan a few hours to enjoy this site.