The Great Western Railway: Paddington- Bristol (selected parts) has been part of the Tentative list of United Kingdom. 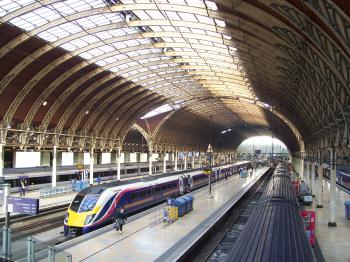 This train line is associated with one of the greatest engineers of the Industrial Revolution Isambard Kingdom Brunel and is one of the best examples of early industrial infrastructure in Britain. There are many points along the route that are notable, the Box Tunnel and the Maidenhead Railway Bridge, made famous by Turner’s painting. However my favourite parts are the two major stations at either end.

Bristol Temple Meads Station has a fine shed but the real joy lies in the faux-medieval main building. The train line was built to connect London to one of the key mercantile ports, which processed the spoils of the empire. The city has a rich heritage, which is displayed in across its numerous museums. It is a great base if you wanted to explore this area of Britain. Whilst it is not a beautiful as Bath I would recommend it as a great alternative place to stay, especially if you don’t want to stay in an overtly touristy environment, as it has a great atmosphere and nightlife.

At the other end of the line is Paddington Station, it is just a short walk from Hyde Park in West Central London and is one of the capitals most beautiful transport hubs (The recently restored Eurostar terminus of St Pancras has my nod as the best, it is probably the finest Train Station I have visited thus far). It looks a little worn around the edges however the fantastic Ironwork decorating the main spans of the roof is wonderful.

I doubt this proposal will make it from the tentative list to become a full site; however it is a remarkable testament to the infrastructure laid down in the Industrial Revolution. It is well worth taking a few minutes to admire the engineering if you are travelling on this stretch of railway on the way from London to the West Country or South Wales.