Apamee (Afamia) is part of the Tentative list of Syria in order to qualify for inclusion in the World Heritage List.

Apamea was a city from the Seleucid era (4th century) that held over 100,000 inhabitants. It was strategically located and played both a commercial and military role in the Hellenistic and Roman periods. The remains are known for their Great Colonnade of 1,800 meters long, a theatre that could seat 20,000, city walls with towers, baths, and churches.

Afamia was much affected by the civil unrest in Syria and basically closed to visitors until summer 2022. We had the place for ourselves. It is not on the program yet of tour operators. The modern town of Afamia is badly damaged and very few people have returned. You need a private car and guide to reach the place and pass the security checks. But the huge Colonnade of almost 2 kilometers is an impressive sight, and one of the longest in the Roman world. Not much destruction, a great relief. Best to walk the whole length. No entrance fee. 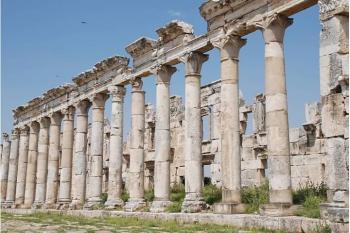 In May 2009, I visited the Great Colonnade at Apamea, one of the longest streets in the Roman world. During this trip, I stayed in room 203 of the Baron Hotel, Aleppo, the oldest hotel in Syria, the same room where Agatha Christie wrote the first part of "Murder on the Orient Express." The Baron Hotel organized a car and driver to take me and another guest on a day tour to visit Serjilla and Al-Bara, two of the Dead Cities, and Apamea.