Shah Jahan Mosque, Thatta is part of the Tentative list of Pakistan in order to qualify for inclusion in the World Heritage List.

The Shah Jahan Mosque is the central mosque for the city of Thatta in southern Pakistan. It was built in the 17th century during the reign of the Mughal emperor Shah Jahan. The mosque is made of red brickwork and the entire structure is covered with 93 domes. The mosque is considered to have the most elaborate display of tile work in the Indian-Pakistan subcontinent. 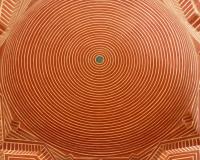 Thatta has seen better days. Once the flourishing capital of Lower Sindh, its heyday was between the 14th and 16th centuries. Within the town little remains of that glory, though the inscribed Makli Necropolis on a hill a few kms outside provides an indication of what once was. Today Thatta itself is going the way of so many small/medium sized towns in Pakistan with uncontrolled expansion alongside minimal provision of infrastructural services and its vernacular architecture crumbling or being destroyed. Within however, 1 undoubted “gem” survives, albeit not in the best of condition – the Shah Jahan Mosque or Jamia Masjid. This was placed on Pakistan’s T List in 1993.

But, wait a minute – doesn’t the UNESCO Web site description of the Makli inscription indicate that the Shah Jahan Mosque was already a part of that inscribed site? Certainly – but see my Forum article trying to set out the history and identify the current “de jure” and “de facto” situation – http://www.worldheritagesite.org/forums/index.php?action=vthread&forum=8&topic=1774&page=0#msg7836. In this I concluded that, whatever the nature of the original Pakistani nomination for Makli/Thatta, for reasons and in steps which are unclear, the Shah Jahan Mosque is "probably" no longer regarded as being a part of it by Pakistan and UNESCO also, whatever its web site says! I asked ICOMOS Pakistan what their understanding of the situation was and received a reply which included this

“the question you have regarding status of Thatta in the WHS inscription does in actuality present the confused state of mind with which heritage properties are dealt with in Pakistan.

The original inscription did mention Thatta's monuments, particularly Shah Jehan and Dabgir Mosques, but over the years, the monitoring missions and the Department of Archaeology and Museums (DOAM) have focused only on Makli Hills. And as you mentioned this has even led to the change in the sites' official inscription title.

It is indeed a pity that the very important historic town of Thatta has been neglected in this WH inscription process. As a result it has suffered through insensitive developments and today the original historic fabric of the city whose skyline was dominated by tall wind-catchers is just seen in historic photographs. …... The two mosques you have mentioned also come under the ownership the (Dept of Archaeology and Monuments) but these or the city of Thatta itself have not been officially included in the WH nomination's dossier. Both mosques (or I should rather say Shah Jehan Mosque and remains of Dabgir Mosque) are however protected monuments under the national 'Antiquities Act'. I am in total agreement with you that instead of having the Shah Jehan Mosque in Tentative list the existing inscription should be extended to include it, in fact not only that but the entire historic city of Thatta (i.e. what little remains of it) should be included.”

But don’t let the Mosque’s probable “non inscription status” put you off! In a country where, if you are not a Muslim, you might begin to get “mosqued out” whilst seeing all those you “ought to” see, this one is a bit special. This isn’t immediately apparent as you walk through a modern entrance gateway and down the “Taj Mahal” type pathway through a garden alongside a fountain-lined canal. In common, I think, with every fountain-lined canal we walked down in Pakistan, this one too was devoid of water. Even the front of the mosque only hints at its interior. Unlike so many of the great Mughal mosques, this isn’t constructed of sandstone and marble but of brick. But, more importantly, this brick has been used in a wonderfully simple way to provide decoration, perspective and calmness via patterns of laying and mortar banding (enhanced by white paint?). This minimalist approach seemed very contemporary. There is some fine glazed tile work, mainly in blue but, except at the almost fully glazed rear chamber and mihrab, these are not the prime means of decoration throughout the mosque but are intended merely to be contributory to the overall effect. This is a courtyard mosque surrounded by arcades surmounted by 93 white domes. The views through the arcades, up into the domes (photo) and out into the courtyard with views of the blue and red walls, white domes and blue sky are very fine. These 2 links (the 2nd is a video) will provide a better impression than my words. (Note that the second one states that the Mosque has been “on UNESCO WH List since 1993” though the text on the Web page says that it was put on the T List in 1993. In either case the fact that a 1981 inscription wasn’t claimed again seems to support the conclusion that it is not currently inscribed)

But all is not well with the maintenance of the building. This video concentrates on the less satisfactory aspects of its condition!

As always in Pakistan we were the only tourists present and inevitably generated some interest from the locals. I remember 2 particular conversations. Throughout Pakistan these usually commenced with them asking our guide in Sindhi (or whatever) who we were and whether could they talk to us! There was usually a complete lack of recognition of what our race or nationality might be. There are currently many Chinese in Pakistan carrying out infrastructure developments and we were even asked whether we were Chinese. Now, having been called (with justification!) “Big nose” many times in China, this seemed to indicate a surprising lack of knowledge of the World beyond Pakistan. We were also asked on several occasions whether we were “American”. Now, given the strength of the travel warnings from the US State Dept relating to Pakistan (“no unnecessary travel at all”) compared with those from UK (“No unnecessary travel to a very limited range of places plus due care everywhere else”), we knew that this was also rather unlikely – but we got the impression that no personal hostility would have followed if we had admitted to being so. Rather the question was genuinely asked in the hope that they might actually see one of those strange creatures, who, they had come to understand, were the source of so many of the difficulties their country faced!

One guy in the Mosque was very pleased to discover that we were English as he had just started an English Literature course at the local university. He had never met a “westerner” - not many Western teachers will have been providing teaching in Pakistan across recent years! Also, this area was not one which has provided many of the Pakistani diaspora via emigration so “contact” with the West through relatives will be unusual. His accent and grammar were almost incomprehensible. Who knows how his teachers spoke and how “genuine” their qualifications were in this country where corruption (or, to put it less emotively, “support of family and clan”) is part of the culture – his was not going to be one of the “top” universities in Pakistan! We asked what “literature” he was studying – “Shakespeare, Milton , Wordsworth”! We pushed for something a bit more “modern” – “Bertrand Russell, Bernard Shaw and Virginia Woolf”!! This syllabus can hardly have been changed since the end of the Raj and was not really designed to fit its students for the modern era let alone being suitable for the level of English that was being demonstrated. We asked what he might hope to do with his qualification – “Teach English Literature”!

Our second conversation provided another insight into contemporary Pakistan. The bearded guy who had just finished his prayers cut straight to the chase after the preliminaries - “What is your religion?” Now there was no hint that this meant “What are you infidels doing in here?”, but rather was possibly motivated by the vague hope that he might actually be meeting a couple of Westerners who were converts. If so we disappointed him. Instead we deliberately took the opportunity to explore a more nuanced view of religion. “Well, we were baptised as Protestant Christians but don’t really believe in any religion at the moment… “Why do you ask? We are not offended, but in our culture, religion is not something many people go around announcing to others, but rather a private matter between themselves and their God… We would never ask a stranger what religion they followed. Why was it so important to you to know?”. The subsequent conversation, albeit friendly, was a case of the blind talking to the deaf. "Religion" imbued his every thought and action!!

So, we remember our visit to the Shah Jahan mosque both for the building and for the interactions we had with the locals!