Hiran Minar is a Mughal-era complex located in Sheikhupura, about 40 kilometres northwest of Lahore. The complex was built in the early 17th century at the site of a hunting reserve. The complex consist of a minaret built in honour of Emperor Jahangir's pet antelope named Mansraj, a rectangular water-tank with an octagonal pavilion in the centre, and a causeway connecting the minaret and the pavilion.

Map of Hiran Minar and Tank 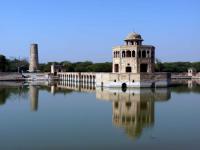