Lagune de Khnifiss is part of the Tentative list of Morocco in order to qualify for inclusion in the World Heritage List.

The Khnifiss lagoon is the biggest lagoon at the Moroccan coast. It lies within Khnifiss National Park. It is an important bird nesting ground. Prehistoric and historical archaeological remains have also been discovered. 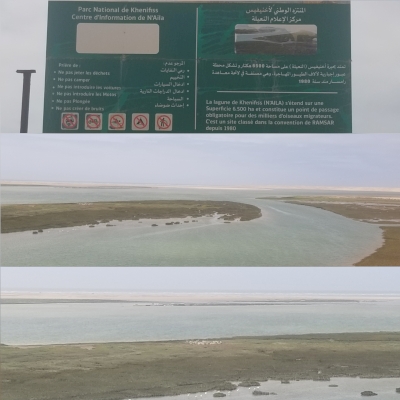 The lagoon of Khnifiss (also called Naila and marked so on Google map) is a small area of wetland just off the coast. This is an easy detour if you are doing a road trip to Dakhla but a tough one if not, and the only other things to see in the area are beach and cheaper gas (subsidized?) so fill up your tank before heading north!

I knew that coming to the lagoon in summer would be a generally bad idea but I definitely would not come here at a better season just for the birds. I think the lagoon is, like many places in the world, important for bird breeding grounds but protection and unique world heritage material are far apart.

I saw only one group of flamingos. I didn't even get close but binoculars are enough from the cliffs and they are "just" flamingos after all. I spoke to a local from the fishing village and he said in high season they would offer boat tours to the first island where there's a small lookout. At the moment it was used for sheep, controversial as that is already.

Anyhow, can't recommend it but for Morocco it's probably special that it's nice when you are driving past it anyway.