You mean I'm not the only one who plans trips around these sites? Cool! I've seen how many sites some people here have been to, and I bow down to your superiority. I am thrilled to see that we have just received our first new site in years - and since it's in my hometown, it's a freebie! I've read that UNESCO believes Canada is already well-represented, in terms of WHS. Nonsense! There is a list of more possible sites suggested by the Canadian government: http://www.pc.gc.ca/progs/spm-whs/itm3-/index_e.asp
I ordered a map from UNESCO of all the sites, and it's up in my office at work (now it's a couple of years out of date). The poster is a great conversation-starter; it gets people talking about all the sites they've been to. Most recently my husband and new daugther went to the Everglades and La Fortaleza in Puerto Rico. Her first World Heritage Sites, not counting the three I visited in Portugal when I was pregnant with her.

This place is a find if there ever was one - go, World Heritage conoisseurs, before mainstream tourists find out about it!

The rock drawings open to the public are split up into three areas, which you have to book separate tours for. Each trip involves a very bumpy 4WD ride into the valley. Be on the lookout for the guards and their very friendly dogs (in fact, watch out for dogs anywhere in Portugal, from what I've seen)! The most popular site is Ribeiro de Piscos - it had the clearest drawings and was the least strenuous walk (for people concerned about such things). Canada do Inferno was the more challenging of the three, with the fewest drawings; although it was a beautiful scenic walk and my husband and I were the only ones on the tour, which made it worth the effort anyway. The tour guides were excellent and were very helpful in pointing out drawings that were at times very hard to see 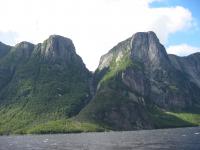 This glorious site needs a photo to accompany these well-earned rave reviews. I agree that the highlights are Western Brook Pond (as photographed - the boat tour is a must) and the Tablelands, where the rocks of the exposed mantle render the soil inhospitable to plants. The contrast between the barren, gold-hued hills of the Tablelands and the heavily-treed cliffs of the rest of the park is really quite startling.

The West coast of Newfoundland is still quite undiscovered and has lots of affordable accommodation, and camping is a worthwhile option as well. The park is huge - prepare to spend a few days at least, and to be driving a fair amount 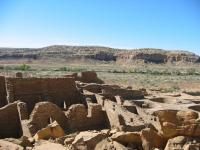 The Chaco Culture National Historical was the last World Heritage Site I visited on my recent trip to the Southwest. Although it is not far from several decently-sized cities and towns, it gives the impression of being quite remote. This is underscored by the fact that entering the park requires driving on 16 miles of rough gravel road. Although a road map makes this seem like a relatively short distance from the highway, realistically it takes rather a long time because one can't drive particularly fast on this very bumpy road (the road is paved once you enter the actual park). The park gets very warm in the summer and there is little shade. 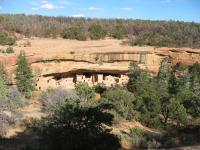 Mesa Verde was the highlight of my trip to the Southwest. I had decided I wanted to see it after reading about it in a book about wonders of the world. Although I was looking forward to touring the cliff dwellings, I had no idea just how much there was to see at this wonderful site. We drove into the park first thing in the morning and spent one very long, perfect September day there, but we could have spent more time easily. Entering the park involves a 25-minute drive up into the hills, which is lovely in its own right because of the views. There are many interesting ruins all along the tops of these hills, but the truly spectacular ones are the famous cliff dwellings built into the walls of the canyons 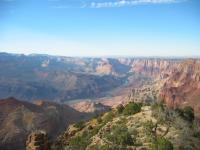 Bill Bryson once said that "nothing prepares you for the Grand Canyon. No matter how many times you read about it or see it pictured, it still takes your breath away. Your mind, unable to deal with anything on this scale, just shuts down and for many long moments you are a human vacuum, without speech or breath, but just a deep, inexpressible awe that anything on this earth could be so vast, so beautiful, so silent."

That about sums it up, and what's more is that I don't think there's a picture in existence that can do it justice (although I've included a pretty one from the South-Eastern end)

No sites visited yet. Every journey starts somewhere.