The Ringed Seal Archipelagos of Lake Saimaa is part of the Tentative list of Finland in order to qualify for inclusion in the World Heritage List.

Lake Saimaa is the only habitat of the endemic endangered Saimaa ringed seal. After the last glaciation in the area, Lake Saimaa was shaped as a result of land uplift and was isolated from the Baltic Sea. This ringed seal is an example of adaptation to a new kind of environment after being isolated in a freshwater lake. Lake Saimaa represents an outstanding freshwater ecosystem that includes many conservation areas in their natural state and provides living environments for several relict species.

Map of The Ringed Seal Archipelagos of Lake Saimaa 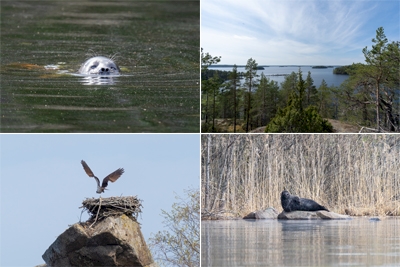 Site visited May 2021. Ringed seal archipelagos of Lake Saimaa were a nice experience. It was also something new to me in my home country. This natural site may not be for everyone, but those who want to see the rare seals, and those who love birdwatching, pristine lake nature and beautiful landscapes will be pleased. I spent two days exploring some of the elements of this tentative site.

When Finland announced a revised list of tentative sites in 2021, it presented one totally new site which seemed right away a logical move. Saimaa ringed seals – of course. It is hard to think any other object in Finland with so much positive impression and support from Finnish people.

Saimaa ringed seals are among the most endangered seals in the world, having a total population of only about 400 individuals. The only existing population of these seals is found in Lake Saimaa. They have lived in complete isolation from other ringed seal species for around 9,500 years and have diverged into a morphologically and ecologically different subspecies of ringed seal. The population is descended from ringed seals that were separated from the rest when the land rose after the last ice age.

Before my visit I had never seen a living Saimaa ringed seal, other than in pictures and videos. Additionally, born and raised in the west coast of Finland, visiting eastern part of the country is almost an exotic experience. Many things are rather different there – in a positive way.

I focused my visit to two national parks: Linnansaari and Kolovesi. The Linnansaari National Park (founded 1956) is usually understood, and also advertised, ”the home of the Saimaa ringed seals”. It has the best tourist infrastructure. The nearby Kolovesi National Park (founded 1990) is also known for its Saimaa ringed seal populations, but it is more of wilderness which is difficult to visit without a canoe or kayak.

I used the Oravi village as my base for day trips. I participated a seal safari 9 AM on Sunday morning which was very popular time of the week. There were about 20 participants so the guides divided us to two boats. The weather was perfect: 20 degrees Celsius and almost no wind at all. On Sunday morning there was also less boat traffic so the conditions couldn’t be better. And the safari was successful. We saw six individuals: two floating on the surface and four lying on the rocks. Guide took us to the most common lolling places. Still, it is possible to spot swimming seals everywhere. You just have to keep your eyes open. One of the seals popped his head above the surface just next our boat. He just stared us for some time and dived away.

On the same day, after a quick pizza lunch, I headed by car towards Kolovesi National Park. My aim was to do a four kilometres evening hike at Nahkiaissalo trail which is the only trail of this national park on mainland. At the beginning of my hike, I was surprised by a thunder and rainstorm, which fortunately ended as quickly as it had started. The main part of my hike was sunny weather. The terrain of the trail is quite difficult so it took more time that I had expected. On Kolovesi there are typically high (almost 40 metres) and steep cliffs which rise from the lake. There were some nice lake views on top of those cliffs.

Next day I arranged a boat taxi to take me to Linnansaari island, at the very heart of the national park. I completed the around the island trail which is 7–8 kilometres. The terrain was a lot easier than on Kolovesi. I enjoyed the lush and untouched leaf tree forests and views from the high cliffs. However, the main thing was to see some birds, especially the endangered white-backed woodpecker. I wasn’t successful with the woodpecker but I saw many other birds. The most impressive thing of this trail was the Linnavuori cliff on the north end of the island. From Linnavuori was such a great views around Lake Saimaa.

While this nomination focuses to ringed seals, there are so much more natural objects to see. These are places for untouched lake nature and lake landscapes at its best. The national parks are good places for birding. Actually the Linnansaari National Park is the home for three animals that are endangered and centerpieces of Finnish nature conservation: Saimaa ringed seal, white-backed woodpecker and freshwater (or landlocked) salmon. In addition of its natural values, Kolovesi National Park is known also for its rock paintings (Ukonvuori, Vierunvuori and Havukkavuori).

All in all, I was very pleased with my two days at these two national parks at Lake Saimaa. The weather was very good and I saw all the things that I wanted to see. As far as I know, Finland is very serious with this nomination. Ministry has announced that they aim to inscription at 2024. I leave discussions about inscription of single subspecies to academics. On Natural World Heritage category this is one of the most unique and valuable things Finland can offer to the World Heritage List.

Which places to visit
Saimaa is the largest lake in Finland, and the fourth largest lake in Europe. One may think why you can’t see so big lake on many maps? The widespread shoreline of Saimaa (length nearly 15,000 kilometres) is zig zag like and maze of islands (14,000) makes it difficult to understand. Actually it is not clear where Saimaa begins and where it ends. Some say that it is a group of separate lakes which are connected to each other. The southern part is called Saimaa or Southern Saimaa, but the northern parts are usually mentioned by the names of the separate basins. Therefore, Saimaa is more of a lake system than one single lake. This area is also called Finnish Lakeland which covers the whole Central and Eastern Finland.

From description text on Unesco web page it is difficult to specify how large area belongs to this site. There is a mention that it would be ”a serial nomination that would mainly consist of state-owned protection areas included in the Natura 2000 network”. The problem is that almost the whole northern part of lake Saimaa is a Natura 2000 area. The only specific places mentioned are Linnansaari and Kolovesi National Parks which are usually considered the core areas of the Saimaa ringed seal. Yet is unclear are the areas south of the city of Savonlinna, especially around the town of Puumala, also in this nomination. On the Unesco web page is mentioned ”In the gap between the two main breeding areas…” which may indicate that the southern part is also included. Puumala also promotes so called Seal Trail so there is already some infrastructure for this TWHS.

When to visit
The best time to see Saimaa ringed seals is from May to September. May is the main seal watching season. In May the seals are molting on the rocks throughout the day. Seals molt from the time the ice has melted for one month, this is usually from the beginning of May until the first week of June. After the molting season the best time to see the seals is at sunset. At the time of sunset the seals are resting on the rocks, but photography is more challenging because it is getting dark.

How to visit
The best option to see Saimaa ringed seals is by attending a seal safari by motorboat or by paddling. The safaris have knowledgeable guides who know the best spots where seals usually are. If photography is your thing then the seal safari in a motor boat is the best option. But if you like to be near nature and enjoy the quietness then I recommend using canoe or kayak. Especially the Kolovesi National Park is famous for paddling routes.

In May there are four to five seal safaris per week. From the beginning of June to the end of September there are seal safaris almost every day, depending of demand. I recommend to book beforehand because especially weekends can be very popular. The usual group safari in motor boat costs 75 € per person and private safaris 375 € per boat. The tours are done without disturbing the seals lolling on the rocks: the guides drive boat slowly and quietly and always keeping a good distance to seals.

About photography, the seals are in a quite long distance so it needs a long telephoto lens, 800 mm or more. In the boats are binoculars for everyone.

How to get
The city of Savonlinna is the main hub for visiting ringed seal archipelagos. Train from Helsinki to Savonlinna is over four hours (one change), and bus is five hours. Oravi is a small village and resort 40 kilometres north of Savonlinna with the best services for visiting both Linnansaari and Kolovesi national parks. There is also a fancier resort called Järvisydän, more targeted to couples and families.

While in Savonlinna the Olavinlinna or St. Olaf's Castle (former tentative site) is worth a quick visit.