Church St. George (Sv Gjorgji) Kurbinovo is part of the Tentative list of North Macedonia in order to qualify for inclusion in the World Heritage List.

The Church St. George in Kurbinovo has fine examples of Byzantine fresco-paintings. The church and the paintings date from the 12th century. The masterful scenes, created by local artists, depict complex theological topics. 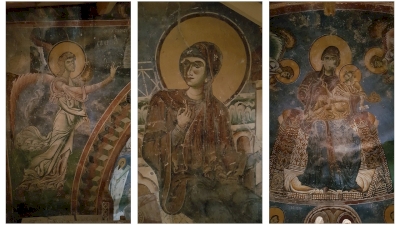 Both our French guidebook and our English guidebook were indicating that the key to open Saint George church was to be collected at a house in the village of Kurbinovo before driving up to the church, but they disagreed on the exact house where to ask for it. To preserve the reputation of these two very well-known Editors, we decided to ignore them and went directly to the church. This turned out to be a good option: the church is under huge restoration work (August 2022) and the two workers (who were having their coffee in the shadow of a nearby tree when we arrived at around 10 in the morning) were happy to let us in.

“Huge” means that the small church is completely covered by scaffolding, including a top cover while the wood roof is being replaced. From pictures, we knew already that this rural church, from the outside, just looks like standard buildings, without any adornment, windows, or bell tower: it is famous for its frescoes inside – so we were losing nothing. Even better, as the works go, temporary wood stairs and platforms have been built inside, so we could face and admire the different scenes from very close. Virgin Mary and angels in the apse, bishops dressed in black and white, Transfiguration, Dormition of Mary etc – and the most famous one, the Annunciation – archangel Gabriel on the left hand side of the apse, Mary on the right hand side. This fresco of Gabriel is so famous in North Macedonia that it is represented on the 50 Denar bank note. The expression of Gabriel, the drape of his clothes etc are sometimes said to be the very birth of Renaissance style, which would have then been exported to Italy. Bear in mind these frescoes have been dated from 1191.

Apart from finding the key (would it become a problem again when the works are over?), the church is easy to find : it is signposted from the main road along Lake Prespa, and all the way through the village (well, a few houses) until the car park (well, the end of the road, with an information board “what to see in the area” and some space to park) : the church is then just overlooking you and reached via a few steps. Although the road is narrow (you could not cross another vehicle) and in poor condition, it is perfectly fine to drive it with a standard car, and it is only for two or three kilometres. An Italian family showed up while we were there, but no more visitors.

And now the big question: would it have its place on the WHS list? The frescoes are clearly ones of the best and oldest Byzantine frescoes we saw during our “Balkans tour” (better preserved than the ones we saw, for example, in Ohrid). This, however, is a single and tiny building, which is not without reminding Boyana church near Sofia. Restoration works are a very positive sign anyway, and North Macedonia will now probably play this card as its next candidate: they placed it on their tentative list very recently (2020, probably at the same time the works started or were decided). So, a final “thumb up” for us.