Murujuga Cultural Landscape is part of the Tentative list of Australia in order to qualify for inclusion in the World Heritage List.

Murujuga Cultural Landscape is the homeland of the Ngurra-ra Ngarl Aboriginal groups. The area on the Burrup Peninsula holds a large and diverse collection of petroglyphs. Especially notable are the depictions of human figures; they continue to be part of the traditions and beliefs of the Ngurra-ra Ngarl. 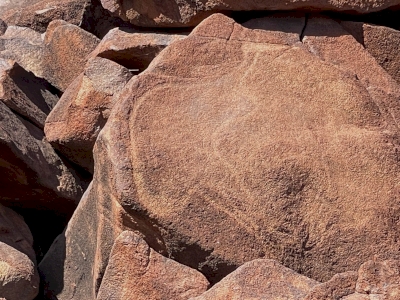 I'm going to put it out there right at the start of this review: the Murujuga Cultural Landscape is one of the most impressive collections of petroglyphs (rock carvings) I've ever seen. It would be justifiably world-renowned if it were located on other continents, and certainly ranks well above many of the other rock art collections already inscribed on the World Heritage List. So what is it?

The cultural landscape is centred on Murujuga National Park, part of the Burrup Peninsula in the remote Pilbara region of Western Australia. It's located on the traditional lands of the Ngarluma, Yindjibarndi, Yaburara, Mardudhunera, and Wong-Goo-Tt-Oo peoples, collectively known as the Ngarda-Ngarli. The national park is about 37,000 hectares, so it's not an extremely large area, but it's packed with an estimated one million petroglyphs. It's believed to be the densest collection of hunter-gatherer petroglyphs anywhere in the world, and what's truly amazing about Murujuga is the incredible variety of petroglyphs, in both age and subject matter. The oldest petroglyphs here have been dated at around 40,000 years old, while some are as recent as the 19th century.

Petroglyphs of humans are quite common with a variety of imagery, ranging from static figures to abstract faces, hunting scenes and ceremonial activities. There's also lots of abstract spiritual art, telling stories of the Marrga, the ancestral beings who created the world.

But it's the imagery of animals at Murujuga that we found most striking. There's so many petroglyphs and so many animals, and together they provide a fascinating showcase of how the animal occupants of the area have changed over the millennia. Carvings dated to 50,000 years ago show crocodiles and wallabies that are no longer found in the area. During the last Ice Age (18-30 thousand years ago), the coastline was 160 kilometres distant, and the carvings are of distinctly inland animals like fat-tailed kangaroos, and - most interestingly - a petroglyph of a thylacine (Tasmanian Tiger), which has been extinct on mainland Australia for at least 20,000 years.

Finally, the most recent carvings are from the modern era where Murujuga is directly on the coast, so the petroglyphs largely show marine animals like turtles, whales, and fish. And most ominously, there's a very faint carving of a single-masted sailing ship, thought to be explorer Phillip King's vessel HMC Mermaid which visited the area in 1818.

Murujuga is pretty remote, even by Australian standards - though it's actually not that difficult to get to. The easiest but priciest option is to fly from Perth to nearby Karratha, with daily Qantas and Virgin services. A cheaper but rather slower option is to drive - it's a mere 1,500km (16 hour) drive from Perth, and along the way you'll pass "nearby" to two other World Heritage Sites: Shark Bay, and Ningaloo Coast.

National Park entry is free, and the best spot for seeing petroglyphs is at Ngajarli (Deep Gorge) with a modern boardwalk and good interpretive signs. We visited in July 2021, and visiting during southern hemisphere winter is strongly recommended - during summertime the Pilbara region is one of the hottest places in Australia and also prone to tropical cyclones.