The Coastal Lomas System of Peru

The Coastal Lomas System of Peru is part of the Tentative list of Peru in order to qualify for inclusion in the World Heritage List.

The Coastal Lomas System of Peru is a set of three coastal protected areas with a very high level of endemism at the floristic level. This high endemism results from the isolation of these habitats, which act as islands of vegetation in the middle of very arid environments. Vegetation blooms in these reserves result from the condensation of moisture from the ocean and therefore depend on climatic, oceanographic and topographic factors.

Map of The Coastal Lomas System of Peru 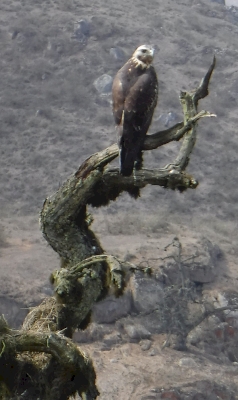 Lomas are fog-watered desert ecosystems from the coast of Peru and northern Chile. They are characterized by seasonally important fog catchment that waters a dense vegetation in an otherwise arid desert landscape. Lomas has been described "an island of vegetation in a virtual ocean of desert". The Pacific fog and mist that water these ecosystems and favor the lush green vegetation is present from May to November. December to April are much rainless months during which the landscape turns brown and dry. This serial nomination comprises three protected areas of coastal Peru, including the largest and best preserved lomas (Atiquipa).

I visited la Reserva Nacional de Lachay in March 2020. Lachay is the most accessible of the reserved located near Lima. I hired a driver in Barranca (Caral) through my hotel. He drove us to Lachay and then dropped me in Chancay to take the bus to Lima (there's a bus there every 15 minutes). It could be possible to reach the park with public transports by asking the bus driver to drop you on the Panamericana at the entrance of the reserve. Note however that you would need to walk 6,5 km in the shadeless desert to reach the hiking trails. And this part of the reserve is moreover rather flat and uninteresting.

Three trails are proposed in the park (del Zorro, de la Tara and de la Perdiz) and they are estimated respectively at 20 min., 1 h and 2 hours. The trail of the Fox (Zorro) is short but gives an overview of the mirador and some cool rock formations. The trail of the Tara (a kind of tree) is the intermediate trail and crosses a grove of taras. The trail of the partridge (Perdiz) goes all around the park and is the longest and probably the most interesting trail. It is the one I've chosen. I hiked the trail clockwise from the last campground on the road. I therefore started by walking on a hill crest along the northern border of the park. This part offers the best views over the landscape. The official trail is well marked, even though many other paths crossed the park. It is advised to follow the park rules and avoid these paths to avoid crushing fragile vegetation. On the way, you can see cactus and lots of dry plants and trees. A visit in the austral winter would have offered a completely different atmosphere (take a look at some Google images!). The nomination file states that an impressive 42% on the lomas vegetation is endemic!

Besides hiking, the other popular activity in Lachay is birdwatching (which is another reason why I chose to visit this one among the nominated lomas). Even though I couldn't find the burrowing owls I was looking for, I wasn't disappointed by the birds in Lachay. I saw 13 species of bird during my walk including some associated with this landscape I barely saw elsewhere (least seedsnipe, Peruvian meadowlark, coastal miner, Peruvian pipit, band-tailed sierra-finch). However, the two coolest bird species here are the black-chested buzzard-eagle that were very numerous and hoovering very low above my head and the adorable Andean tinamou that were running around.

Desert environments being underrepresented on the WH list, I favorably vote for the inclusion of these parks. The unique seasonal vegetation pattern and the high level of endemism are other strong arguments in my opinion. It makes furthermore a fun visit close to Lima. I spent about 2h30 in Lachay and enjoyed every minute.