Church of San Salvador de Valdediós is part of the Tentative list of Spain in order to qualify for inclusion in the World Heritage List. It is a proposed extension of Asturian Monuments WHS.

The Church of San Salvador de Valdediós is a pre-Romanesque church of the Asturian style, built in the late 9th century. It is located in the Valdediós Valley, about 40 kilometres east of Oviedo. The church has a classical basilica ground plan with three naves, a barrel vault and three rectangular closed apses. 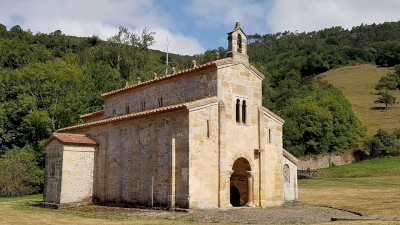 This tiny church is proposed as an extension of the six already inscribed “Asturian Monuments” in and around Oviedo in Northern Spain. The first three inscribed ones were the most famous and typical ones (Santa Maria and San Miguel on Monte Naranco, Santa Cristina), built at the time of king Ramiro I, which is the “zenith” period of the kingdom of Asturias. Then three other monuments were added to this serial WHS, covering earlier years (San Julian, Camara Santa). San Salvador de Valdedios would be the seventh component and would represent the last phase of the Asturian architecture.

San Salvador church stands in the precincts of Valdedios monastery and has recently been restored (it may not have been proposed with the first extension of this WHS while the works had not been completed?). The location is great, in a green and quiet valley of Asturias, about 40 minutes driving from Oviedo. Visits are by guided tours only, for a few euros per person. You can chose to tour the complete monastery, or only San Salvador church (known as “el Conventin” at the ticket desk); in that case, you would leave the group earlier, as the tour precisely starts with San Salvador church. We visited this place on an afternoon in August 2020. Gates open at 16:30 and groups were limited to around 15 persons (Covid rules I believe), on a “first come, first served” base, and we were lucky go in the first group, as there were much more visitors queuing when we left at the end of our tour. The area of the monastery is fully walled, so we will see nothing unless you can actually pass the gate.

As already mentioned, San Salvador church is a small, well preserved building. It has many interesting details, such as carved arches on top of the windows and some painted walls inside. Once inside, the feeling is of a narrow, vertical space, almost a Roman monument. Quite different from the other already inscribed Asturian monuments. Historically interesting is a stone set in one of the external walls, which reads the date when the church was consecrated (893 AD), and the bishops and clergy people who attended this event: this building can therefore be precisely dated.

As a conclusion it would be fine and logical for me to see this building added to the WHS list as an extension of the six already inscribed ones.