Parc Naturel Cova, Paúl et Ribeira da Torre is part of the Tentative list of Cabo Verde in order to qualify for inclusion in the World Heritage List.

The cultural landscape of the Natural Park of Cova, Paul and Ribeira da Torre is known for its centuries-old terracing of the agricultural land. A system to capture rain is used for irrigation. From the volcanic Cova crater, water comes down via waterfalls in the rainy season and widens the streams of Ribeira da Torre and Paul. The park is also one of the most biodiverse of the country. 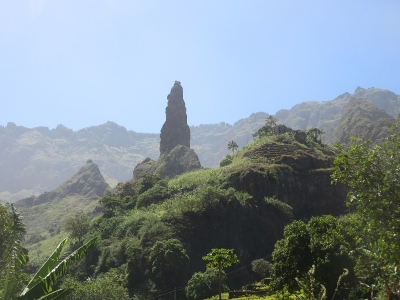 Cape Verde has a very misleading country name. It was named after the closest point in continental Africa (Green Cape), whereas the country itself is not verde (green) but rather desert-like. There is, however, one exception, which is the island of Santo Antao. The island is the westernmost in the archipelago and takes the most precipitation. There are high mountains dividing the island in two parts, where souhteastern part is barely green, while in the northwest there are regular forests and lots of plants.

Some parts of the island (all being on an usual tourist route and easy to access) were recently submitted as T-list site. The most picturesque is Parc Naturel Cova, named after the extinct crater of Cova volcano. All its surface is really green and used as agricultural land. Two other parts of the TWHS are green valleys of Ribeira da Torre and Paul. The most spectacular is the view of Ribeira da Torre (see photo), a stone steeple that surprisingly survived erosion. Along the valley of Paul, on the other hand, there are great-looking traditional stone houses, as well as marvellous stone bridges. Both valleys are used for agriculture, mostly for sugar cane, which is the basic ingredient for famous Caboverdian rum (called here grog).

Overall, although it is quite hard to assess the outstanding universal value of sites of this type, this TWHS has one of the best views in Cape Verde and is definitely worth visiting. Although the island of Santo Antao does not have an airport, you can go there by ferry from Mindelo (well comunicated with Praia or Sal). Full tour on the island with private taxi cost us around 65 euro (6-7 hours of visiting).