Sacred Mountains of Mongolia is part of the Tentative list of Mongolia in order to qualify for inclusion in the World Heritage List.

The Sacred Mountains of Mongolia is a serial proposal that includes six sites spread across the country. The tradition of worshipping sacred mountains and the associated customs and rituals has been developed and practiced by Mongolians since ancient times. Due to the traditions of worship, the sacred mountains remain untouched and are home to rare and endangered plant and animal species.

Map of Sacred Mountains of Mongolia 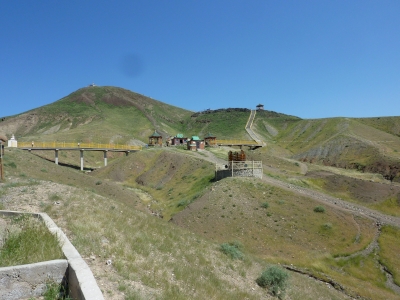 I am honoured to be the first to describe this tentative WHS site. No wonder, though, because if it ever makes it to the list, it will surely be one of the toughest and most laborious to tick off in its entirety: Mongolia is huge and extremely sparse, and each of these peaks easily requires days of travel hiring local drivers to go there, and travelling is never an easy nor a fast task in Mongolia.

I realised to have been lucky enough to ascend one of these "dear ones", as many mountains are euphemistically called (traditionally, out of respect you should not utter the names of mountais or passes, especially difficult ones, when you are near them, so as not to attract misfortunes), namely the Khan Bayanzürkh (Хан баянзүрх xайрхан) mountain back in August 2018. The name more or less means "King Rich-Heart", and one of its symbols is a crown. On the same journey, I also should have seen from afar the imposing (4021m) and snow-capped Otgontengger (Отгонтэнгэр, "youngest son sky") in the north-western mountainous region of Zavkhan (Завхан), consecrated to the wrathful deity Ochirvaan' (Очирваань, better known as Vajrapāṇi), and one of the most important pilgrimage sites in the country. So my recount and considerations will be mainly based on the former. Just as a comment, the Otgontengger itself is not accessible because of its sacredness, and this might apply to other Mountains of this TWHS too.

Khan Bayanzürkh lies in the south-east, in the region of Dornogov' (Дорноговь = Eastern Desert), not far from the town Sainshand (Сайншанд), which is the only major form of settlement in a very big radius (at least 200 kms) and not so distant from the border with China. As of now, it is not anywhere near the touristic routes in the Gobi desert, so you really have to want to come here, and you will find yourself in the middle of a vast, extremely thinly populated and arid emptiness, where the true "desert-like" Gobi begins after the "steppy" one. Going there, I crossed the utmost desolate (but fascinating) and flat landscape that I have ever witnessed in my life. The road itself is straightforward: from the capital Ulaanbaatar you either take the main, paved road towards Zamiin-Üüd (Замын-Үүд) and China for ca. 450 kms until you reach Sainshand (~6hrs), or you take the train to the Sainshand station (slower, and it might be a night train), as the stop is also part of the Trans-Mongolian branch of the Trans-Siberian Railway. I don't know the situation of flights; there might also be buses (very slow ones). From there, you need your own or some local transportation. Just to give some context, I was travelling in a van with my girlfriend's family (me being the only Westerner... 😊), so, apart from the whole experience being exhilarating (and maybe making me biased), I really didn't have to worry about transportation; in any case, the site is frequented and extremely well known, everybody will know how to direct you (the same for the monastery, see below).

This small mountain range juts out isolated from the surrounding flatness. It lost its pristine status long ago: the need for worshippers to ascend in a comfortable has had as a result that you will find a long staircase to the top, along with many small stupas and the like (yes, some of us might be disappointed by this, because the Western actual trend for conservation is quite opposite to the "Eastern" trend for "comfortabilisation" that you can appreciate in many places in Asia). All this arrangement looks quite recent. But still, the ascent not being as demanding as once, it remains quite steep. There are some explanatory shields in Mongolian. The last part of it and the ovoos (oval-shaped stone mounds for veneration) at the top of the mountain are accessible only to men. There you can contribute with your stones and make a wish (and let your eyes sweep over the vast panorama), which is said to be made true by the Mountain. And that's it!

The location clearly holds a very important place in the local beliefs and is an important and beloved pilgrimage site. It is obviously a very old, shamanic kind of veneration, which has acquired a (very thin) Buddhistic layer over time. This is surely similar to many other sacred mountains of the world, as e.g. in neighbouring China, but, contrary to many others, it maintains much of its wilderness, as nearly everything in Mongolia. is it worth the trip? By itself, I don't know (in any case, prepare a good wish in advance): if you are not interested in a cultural background which you have to be willing to experience yourself, it's nothing more than a barren mountain like many others. It might perhaps be an interesting diversion during a Trans-Mongolian Railway trip towards Peking. But, but... south of Sainshand and the Khan Bayanzürkh there is actually another place which, in my opinion, could actually be itself worth of a WHS status, and which I lively suggest as a one- or two-night stop: the Buddhistic Khamar monastery, or Khamriin khiid (Xамрын хийд). Please allow me a small digression.

The Khamar monastery (which you will have a tough time finding on many maps and of which I unfortunately do not know the co-ordinates) was built as a bastion of spirituality and education by the monk Danzanravjaa (Данзанравжаа), to whom a museum is dedicated in Sainshand, at the beginning of the XIXth-century in the proximity of an "energy node" (and maybe the Mountain has something to do with it). What have the merciless turns of history left of this site? Actually, nothing... or nearly nothing. After its definitive destruction during the Sovietic upheavals of the '30s, the current complex of the monastery has been being (re)built only since most recent times, and the work is still in progress. The new buildings are nice and populated (I got my blessing from a chanting monk), but the true points of interest are the nearby energy centers and the small canyon with the monk caves. The energy centers are two: a square on a panoramic ledge over the reddish desert delimited by a perimeter of stupas (slightly reminescent of Kharkhorin); and two big, offering-milk-encrusted (and stinky) stupas on a hill (called "boobs" for obvious reasons). Here people come e.g. at dawn to greet the sun or lie in stone circles to absorb energy. I do not know how much of these structures is original, whatever this means, but I think very little; nonetheless, their form or meaning is not new. However, their simplicity in this setting has something spellbinding. The monk caves are the most historically relevant part and are situated in a small, rocky ravine where some ruins of small temple-like structures remain. Here, monks came to segregate themselves for long periods of ascetic meditation and there are some old and recent statuines and figures of divinities. There is a path linking all these sites, and it's easy to roam around. There are some explanatory shields, all of them in Mongolian. Camping is allowed and seems to be the only viable option for accomodation (but in the big town Sainshand you will find some, of course). There are no other facilities.

At the end of this lengthy description of one (!) site out of six of this tentative WHS submitted in 2015, I can try to draw some conclusions. Will it make to the list? I am not so sure about that, even if I'd like them to. The fact is that each of these Mountains may be hugely fascinating and evocative when considered as "attractor" of the spiritual life of Mongolia, and can surely be greatly appreciated from this side, as I tried to convey through my account, but apart from that they are simply... mountains (and with this I don't mean to be blasphemous). There's little beyond the Mountains themselves apart from some small shrine; there's nothing nearly approaching the artistic richness of e.g. the sacri monti (sacred mounts) in Northern Italy, nor, in most cases, naturalistic peculiarites that might substantiate this candidature. I have the impression that sites like these may be rather part of the intangible cultural heritage, like "worship of mountains as symbols of superior powers" (this is indeed mentioned in the official description). So, despite their spiritual importance, I do not know if they completely satisfy criterion (iii): "to bear a unique or at least exceptional testimony to a cultural tradition or to a civilization which is living or which has disappeared". To begin with, it surely is not unique to Mongolia; and moreover, it is not something that you can "see". However, I think that some of these sites might be enriched with other cultural landscapes and presented on their own in a slightly modified form: it is the case of the Khan Bayanzürkh together with the Khamar monastery (not explicitely cited in the proposal). Then these places, singularly, would really show their "outstanding universal value" as spiritual hubs, in an amazing natural context.

- Photo: View to the top (peak on the left) of the Khan Bayanzürkh from the first steps. The darker dot is a defect of my camera.