South of Ricaurte Province is part of the Tentative list of Colombia in order to qualify for inclusion in the World Heritage List.

South of Ricaurte Province is a mixed region where fossils, archaelogical sites and colonial heritage can be found. It includes Villa de Leyva, one of Colombia’s best preserved colonial towns. Iguaque Flora and Fauna Sanctuary is centered around (sacred) Lake Iguaque.

Map of South of Ricaurte Province 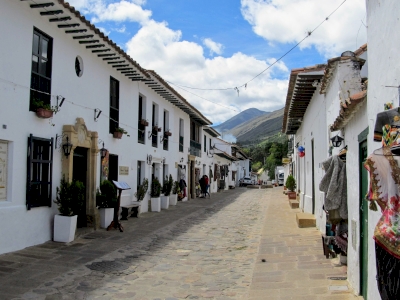 A pretty broad name but perhaps the only one that makes sense for a TWHS whose only real unifying feature is the location. Reading up on the description it sounds like they just threw in everything they could think of for this one from paleontological sites, pre-hispanic sites including an astronomical observatory, a natural sanctuary and several colonial towns. To me that usually means nothing will stand out as being particularly exceptional by itself so we didn't put a lot of effort into this one and just visited the colonial heritage town of Villa de Leyva.

Only 4-5 hours from Bogota and considered one of the most beautiful towns in Colombia, this is a popular, busy tourist site in its own right complete with lots of guesthouses, cafes, souvenir shops and chocolate museums. In addition to the standard but cute 2-story, white-washed and red-tile roof buildings, Villa de Leyva also boasts the largest plaza in the country. The plaza is a large open space once used as the regional distribution centre by the Spaniards so it lacks the usual vegetation and shady benches to laze around on.

There are a few fossil museums in the immediate vicinity and it is easy to find taxis offering to take you around to visit the other towns and sites in the surrounding area for those wanting a more thorough exploration of all this site entails.