United Fruit Company Infrastructure is part of the Tentative list of Colombia in order to qualify for inclusion in the World Heritage List.

The United Fruit Company Infrastructure was a system created for banana exploitation. It impacted the urban and industrial landscape of the Zona Bananera region. It is associated with the novel ‘One hundred years of solitude’ from Gabriel García Márquez, which describes the consequences of a major strike of plantation workers in the Banana zone in 1928. 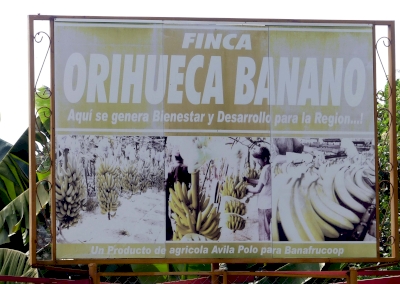 Now – why might one pass through Colombia’s “Zona Bananera”? It could be that one is

a. in the Banana business
b. simply en route between Mompox and Sta Marta
c. a devotee of the writings of Gabriel Garcia Marquez
d. a WHS “collector” trying to tick off another of Colombia’s Tentative WHC a.k.a “United Fruit Company Infrastructure”

Well, in Dec 2019, we fitted each of the last 3 and the very last was in fact probably the least rewarding of the reasons for being there. However, in support of the attempt by this community to review all TWHS I contribute below what we discovered - on both d and c

This site was added to Colombia’s T List in its 2012 update – along with 11 other of its current 16 TWHS. The UNESCO entry states “Zona Bananera is a relatively recent municipality, but, traditionally, it also gives its name to a region.” – However, all of the towns listed are situated within this “recent” municipality. If you travel along Rte 45 from Aracateca northwards you will pass through its eastern boundary but you really need to go a few kms west of this road to towns such as Orihueca and Rio Frio – both of which we visited. The former is described in the UNESCO entry as a “town with four streets and six alleys had a telegraph station; it was a station for the Magdalena Railroad, whose road still goes through the village” – and it isn’t far wrong!!

The Municipality (and hence presumably the T List entry since it doesn't get a specific mention?) does not however include the town of Aracateca. This is a surprising omission as the UNESCO text waxes lyrical that “The novel takes place in a town called "Macondo", whose name came from a banana farm located near Aracataca (the writer's hometown), appropriated by the United Fruit Company. The quiet place was interrupted by the sudden arrival of what the writer calls the "leaves storm", which represents the arrival of an American banana company which changed Macondo forever; foreigners built beautiful towns with white houses, surrounded by tall walls, a railroad and opened banana plantations.” The name indeed might have come from a nearby farm but the town of “Macondo” is unarguably based upon “Aracateca” and its most notable sight is that of Marquez’s home. Amazingly this is free-to-enter and is surely a “must do” for anyone who reaches the area?

I had hoped - vainly - to “capture” in my memory a bit of the spirit of Macondo, whether in Aracateca or in one other towns but, only in the house itself, with its well presented references to passages in the writings, was I able to conjure up anything of those past years. We drove along to the railway station - such a significant place in the history of Macondo. It clearly no longer functioned as such (though had been tarted up as part of what seemed to be a tourism push by Aracateca) but a railway line still ran past it and its shiny rails confirmed that it was still in use. In fact it is now lies on a recently refurbished line which moves vast amounts of coal from Colombia’s interior to the Coast – we watched as a train, pulled by 4 locos, and which could have been a mile long, trundle by for what seemed an eternity. The station was an irrelevance.

The same railway line passed through the main street of Orihueca – but, as far as I could see it lacked even a station building! For the rest, the town seemed just to be typical “small town” tropical Columbia. Around, there were undoubtedly banana plantations (photo). But in this area, these seemed to be being displaced by growing areas of cane production (though Colombia itself remains the 3rd largest exporter of bananas Worldwide). Unlike the coffee plantations within the Coffee CL inscription the Banana plantations themselves don’t really figure in the UNESCO T List description which concerns itself mainly with the “Civil works” of the towns. The trouble is that those “civil works” don’t seem to possess much heritage value – schools, police and telegraph stations, an irrigation canal and always “that” railway.

Perhaps there are worthwhile examples of tangible heritage in places like Orihueca which need better identification and explanation - but I doubt if there is enough to justify inscription. Which is a shame – the 20thC history of Colombia is inextricably intertwined with that of the UFC. I found value in just following up that history and having at least some idea of what impact it had on Colombia past and present. This web site provides a quick overview.