Lower Basin of the Chicamocha River

Cultural Landscape of the Lower Basin of the Chicamocha River has been part of the Tentative list of Colombia.

The Cultural Landscape of the Lower Basin of the Chicamocha River is a mixed proposal. Its cultural features include Pre-Hispanic Archaeological Sites, the Road Network, The Passage over the Chicamocha River at Sube and the Trade of Muleteering and Tobacco. The river is part of the deep Chicamocha Canyon, which is 244 km long.

Map of Lower Basin of the Chicamocha River 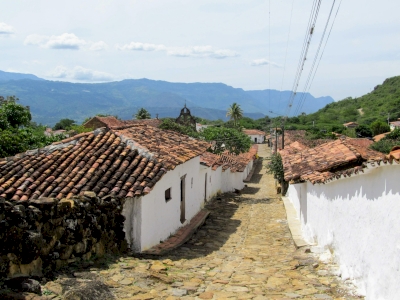 Continuing north, it took us half a day to get to San Gil from Villa de Leyva. San Gil, is the most touristic town in the area and makes the most logical base for exploring this TWHS. This cultural landscape seems a bit more unified and organized than the one we'd been to previously with it being based on the transition/fusion from pre-hispanic Guane culture to colonial occupation in this area. Small colonial towns were built over Guane villages around the canyon and later isolation when bypassed by modern roads has led to the preservation of the towns as well as the colonial trail network (built over pre-existing trails) connecting them.

There is a Guane museum in San Gil but otherwise found it to be rather busy for a small city. There are good connections from here heading north and south and lots of affordable food and accommodation options. From the local bus terminal there are regular buses to the smaller towns in the area that are mentioned in the TWHS description. We visited Barichara on a day trip and hiked the portion of the trail network to Guane village. Barichara is very pretty and well preserved. I saw a recent list rating it the most beautiful of Colombia's colonial towns so it is far from being an undiscovered gem, but it hasn't been overdeveloped yet either. There are beautiful views over the canyon and it's worth the visit just to sit with a few drinks at a cafe at one of the viewpoints in town.

The "hike" to Guane is easy and straightforward. An uneven path of deteriorating stones lined by stone walls leads down into the valley. It is only 6km to Guane and took us less than 2 hours. The only difficulty is keeping an eye on your footing and the heat. It is mostly through the rural countryside and apart from the occasional farmhouse there were only birds to keep us company. It wasn't busy and this is the most frequently hiked portion of the trail and for anyone with more time or ambition you can continue through more villages, possibly for days. Guane village is tiny with the usual plaza and colonial church and it wasn't long before a bus came by to take us back to Barichara.

Overall, the authenticity of this site seems high and even the most touristic areas are well preserved. There is still much to be done to study and document the pre-hispanic portions of this site but we enjoyed and found value in a visit to the area regardless of its WH status.

Unesco Website: Cultural Landscape of the Lower Basin of the Chicamocha River