Old Fourah Bay College Building is part of the Tentative list of Sierra Leone in order to qualify for inclusion in the World Heritage List.

The Old Fourah Bay College Building symbolizes the first institution of higher learning in modern sub-Saharan Africa. In the building from 1827, founded by English philanthropists, university education was provided to West Africans, as an alternative to studying overseas. It produced Christian clergymen and political leaders. 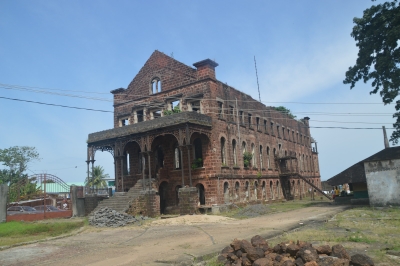 In November 2018, I visited Freetown, the capital of Sierra Leone, which as its name might reveal was established in the eighteenth century as a settlement for freed slaves.  By the early nineteenth century Freetown had became a British Crown colony, and I tracked down several of the remaining colonial-era buildings, including the original building at Fourah Bay College, the oldest college in West Africa, just a short walk from the National Railway Museum.  I made my arrangement with Bimbola Carrol at VSL Travel.