Banwari Trace Archaeological Site is part of the Tentative list of Trinidad and Tobago in order to qualify for inclusion in the World Heritage List.

Banwari Trace is the oldest pre-Columbian archaeological site in the Caribbean. It dates from about 5000 B.C. It holds significance for understanding the migratory patterns from South America into the Caribbean region. Stone and bone objects have been found plus a human skeleton. 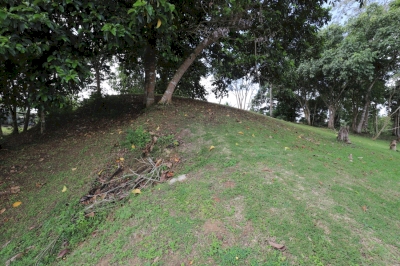 Ticking of WHS is one thing for me but also ticking of countries (I love lists) and with direct flights on KLM from Amsterdam to Trinidad & Tobago I just had to go. Of course also visiting the various TWHS.

How to get to Banwari Trace Archaeological Site

I would say: by car only. On Trinidad public transport is not reliable (except maybe to Maracas beach). Hiring a taxi for a fixed price will do the trick but do count on an easy 100 USD as Trinidad IS expensive! Probably it's better to hire a car for approximate 50 USD / day. You can combine a visit here to Pitch Lake (another TWHS).

Keep in mind as well that the site is not standard open. You would think so as they have no less as 4 toilets in a small building. You have to arrange with the National Trust that they contact the caretaker (lives next door) so he knows you are coming. I was lucky on a Sunday that he was at home and after explaining why I visited he allowed me in and explained a bit about the site.

It's small. The total size is like a moderate plot of land which normally would be for a house. It's a small hill actually. There is no explanation signs. The caretaker told me the government has plans to make a path with signs explaining the site. Including a small exposition with the finds but not the skeleton as it's at the university and to fragile. These talks are on for 5 years now and nothing happens.... anyhow the caretaker can explain you.

Should it be WHS?

I have mixed feelings. From a visitors point of view it's nothing. You can see it in a minute. From a cultural perspective yes but there must be more excavations be done if there is any more remains. If there is, yes, if it's just the skeleton and some other fragments, I'm not so sure if it deserves WHS status. At the other hand, I also think that each country deserves at least one culturual and one natural if existing. Then, this place for sure is the place all though the magnificient 7 buildings in Port of Spain are also interesting from a cultural point of view.

[photo license for worldheritagesite.org by Els only!]