Amedy city is part of the Tentative list of Iraq in order to qualify for inclusion in the World Heritage List.

The origins of Amedy, “City of the Medes”, date back to 3000 BC. It is located on a high plateau. Amedy is believed to have been the seat of the Magi, including the Biblical Magi or the "Three Wise Men". Among its historical remains are two city gates, a 15th century minaret and a Parthian engraving. 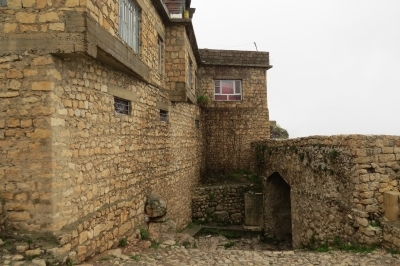 Unknowingly I visited another TWHS besides the Erbil Citadel during my trip around Iraqi Kurdistan. Geographical and historical names are often spelled in various ways here. This makes it difficult to Google information about them while planning beforehand. And there's still no decent travel guide with a focus on Kurdistan. Maps are odd too. Most show a lake for example that was planned by the former regime but never came into existence.

Amedy or Amedi was known to the Assyrians since the 9th century BCE as 'the city of the Medes' (Kur a-ma-da-a-a). Medes, Persians and Assyrians fought over this region in ancient times. It was a capital for the kingdom of the Medes, and later Assyrians took over. According to Wikipedia, Amedy even is believed to be the home of the Biblical Magi or the "Three Wise Men".

We went to Amedy early on in our tour. The town lies in the North, not far from the Turkish border. It was a rainy day and we stayed for an hour at most, but it clearly had an edge above other towns in the region. Amedy is proposed as a mixed site, and it compares itself to the Minaret of Jam and Uluru. No modesty here! The town is quite popular with regional tourists because of its hilltop location and the great views to be had of the surrounding mountains. We did not see any of that unfortunately because of the clouds and rain.

The cultural part of the nomination comprises the old minaret in the center of town and two city gates. They even have their own information panels each (in English/Kurdish/Arabic), a rarity in Iraqi Kurdistan. Not that they hand out much information: the one at the old Bahdinan gate tells us that it is also known als Mosul gate or Sipna gate. And that its origin is pre-Islamic, but the creation date is unknown.

In general, Amedi is a nice little town to observe some of the Kurdish daily life. The main street has a tailor making the Kurdish national dress for men in children's sizes. There's a cosy tea house with two flat screen TV's displaying the National Geographic Channel. What's left of its ancient origins is too little I fear to ever make it into the WH list. Iraq has some better options on its T-List - sites that are practically impossible to access at the moment such as Nimrod and Nineveh.