La réserve naturelle de la Rusizi is part of the Tentative list of Burundi in order to qualify for inclusion in the World Heritage List.

Rusizi Nature Reserve lies next to the Rusizi River. It includes 2 sectors: the Palm Grove sector (a strip of flood-plain with palm trees) and the Delta sector (a wider area with islands and channels). The site supports a wide diversity of waterbirds, particularly migrant species. 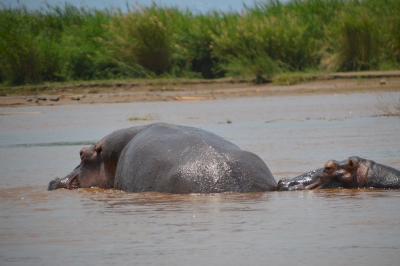 In September 2019, I hired a small boat to cruise along the Rusizi River, which flows through Rusizi National Park in Burundi. I went looking for Gustave, a large Nile crocodile, who is suspected of having killed as many as 300 people along the banks of the river.  My search for Gustave was unsuccessful, but that could be because he hasn’t been seen in a few years and is rumored to be dead, but no one is certain.  But, I encountered several pods of hippopotamuses, which kill more people than any other African animal, other than mosquitos, and are estimated to kill more people each year than the combined total of lions, elephants, leopards, buffaloes and black rhinos, the Big Five.

To see crocodiles, we drove to Albert Ngendera’s home, not far from Rusizi NP.  Albert's home is surrounded by pens containing enormous crocodiles. In 2005, he acquired a dozen small reptiles to save them from the cooking pot — his neighbors poisoned a few, but the survivors are now more than eleven feet long, almost too big for the ponds that abut Albert’s kitchen.

I made my Burundi travel arrangements with Kelly at Augustine Tours.