Wild Ass Sanctuary is part of the Tentative list of India in order to qualify for inclusion in the World Heritage List.

The Wild Ass Sanctuary in the Little Rann of Kutch covers a saline desert. It protects the last population of this specific sub species of wild ass. There is hardly any vegetation in this area, except for during the 1 month yearly monsoon period. 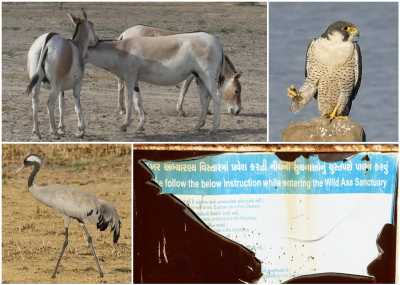 Gujarat possesses 2 wildlife “parks” with UNESCO WH “history”. Each “majors” on a specific Mammal species - Gir NP, famous as the only location remaining for the Asiatic Lion, and the Little Rann of Kutch, gazetted as a “Wild Ass Sanctuary”. The former was once on India’s T List but was removed in 1992 and the latter was added in 2006 having once had a failed nomination way back in 1993 - and it remains there (without, as far as I am aware, any further nomination activity). We had time for but 1 “wildlife” experience during our 2019 trip to Gujarat - which was it to be??? Gir seemed to require at least 2 days of a.m/p.m game runs in order to provide even a "hope" of coming up with a lion and reports of the experience on the Web were not that inviting. But can anyone really justify going out of their way to see an “Ass” – an animal whose general persona is of a rather unprepossessing creature which, across the millennia, has been badly treated by humans as a pack animal and "repays" that treatment by braying complaints and apparent general "stupidity"?

Well, the Indian Wild Ass on show in the Little Rann of Kutch, is, I think you would agree (photo), actually a rather a handsome creature, somewhat removed in looks and stature from the domesticated version most of us will have come across in N Africa/Middle East!! It turns out that there are 2 species of “Wild Ass” – The Asian and the African. Each has a number of sub-species/races. Our poor beast of burden was domesticated from one of the African sub species (the Nubian?) to become the "Donkey" whilst the Asian species remained resolutely "untameable". It could be said that, in terms of the brutal "logic" of gene survival, the Faustian pact with humans permitted by the attribute of "tameability", granted considerable success to the Donkey's genes. There are some 40 million Donkeys, whilst there are but a few thousand Asian Asses! The African part of the family is often called the “True Ass” whilst the Asian branch is sometimes referred to as a “Half Ass” (!!!). This indicates the degree of genetic variance between the 2 Ass species such that they are almost as different from each other as they are from other parts of the “Equus” Family - the Wild Horse and the several species of Zebra. For its part, the Asian Wild Ass (Equus Hermionus) had 5 subspecies which range(d) across Central Asia from Mongolia to Persia. 4 still exist – known by their local language names. 1 of these is the Khur, or Indian Wild Ass, which lives primarily within the Little Rann of Kutch Wildlife Sanctuary but has recently been extending its range into the Great Rann and elsewhere. In 2015 IUCN moved the Wild Ass from “Vulnerable” to merely “Near Threatened” on its “Red List" The official page indicates a rising population of c2000 though other sources claim a total of almost 5000. Generally it would appear that the species is doing quite well in the Sanctuary.

Unless you are a collector of Mammal species/subspecies ticks (there are such people!) I couldn’t recommend a trip to the Little Rann just to see the Khur, but the area offers rather more. First – you ARE almost guaranteed a view of it. We had excellent ones of both solitary alpha males and of groups of females and mixed foals - both “cooperated” for photography. And then the Little Rann is also a fine place for birdwatching. The Word “Rann” indicates a desert with intermittent flooding and marshy, saline areas. The flat salt pans/lakes are interspersed with slightly higher areas of bush to which the Khur can retreat for food when the grass is finished (they are evolved to crop grass very low). In Feb there was a reasonably large lake and also nearby reservoirs for farmers which the birds were happy to use. As a result we had excellent sightings of Flamingo, Pelican and Cranes (Common and Demoiselle in VERY large numbers). We were particularly pleased with lengthy and reasonably close views of Peregrine Falcon, which I always associate with mountains and high dives from cliffs but which seemed to be doing very well among the desert flats! There was also a wide variety of other waterfowl and the normal wide range of “local” Indian species. The whole morning experience reminded me very much of our day in Saryarka some 3000kms to the North. Different month (May), but many of the same species in “similar” flat marshy semi desert land albeit in a different climatic zone. Each has a (semi) iconic mammal species – though the Rann “delivered” in that respect whilst Saryarka didn’t!!!

So - what of the Sanctuary’s chances of ever being WHS inscribed??? One aspect I haven’t mentioned is the use of the area for Salt production. This has been a traditional, family based, industry across the Little Rann by the Agariya people. We visited one such family – saline water is pumped to the surface and allowed to evaporate in ponds. Salt crystals are formed which are regarded as being particularly pure. Each operation by itself is small scale, but their numbers are quite large and the families now use solar panels to assist with pumping. They spend the entire season out in the desert. The activity is regarded by (at least) the Indian Naturalist bureaucracy as being incompatible with the gazetting of the area as a wildlife sanctuary (or more). The families claim that they do nothing to harm either the Wild Ass or the other natural aspects (their operations are confined to the desert flats) – the government claims that their presence makes protection from e.g poachers difficult – the families claim that the ass isn’t in danger from poaching but from farming incursions……. And so it goes on!!!

As far as I can establish, the Sanctuary IS a part of the “Rann of Kutch Biosphere Reserve” (BR) created in 2008 and the largest BR in India. A slight concern is that, elsewhere, the Kutch BR is specifically titled “The Great Rann of Kutch BR” which would imply exclusion of the Little Rann. But see this academic paper which describes both Great and Little R of C as being included (it is apparently normal usage to encompass both “Great” and “Little” in the general term “Rann of Kutch”). This from the Times of India of Jul 2008 would also seem to confirm the inclusion of both Rann elements in the BR. The report also states that “The KBR proposal will now be sent to UNESCO for recognition” (as part of the UNESCO “Man and the Biosphere Program”). In fact, 11 years later it (along with 7 other of India’s 18 National BRs) is NOT yet part of the UNESCO program.

Even if the Wild Ass is doing "ok”, the Sanctuary didn’t give any impression of being that well managed/funded. The notice boards we passed on entry/departure were rusty and uncared for. Despite the reasonable number of eco-tourists who visit, there was no on site infrastructure and the place we had to reach to register our intended entry was hidden away unmarked in the back streets of a nearby village. As a “Sanctuary”, the restrictions on allowed activities are lower than for e.g an NP – hence the salt working and also allow the presence of local livestock within the boundaries. Entry is only by 4 wheel jeep accompanied by an authorised wildlife guide. We picked ours up at our Rann Riders  hotel. It was an “adequate” place to stay but is over 20kms from the Sanctuary entry – there are plenty of others to choose from in the area.

In conclusion - I can’t see this progressing as a WHS nomination in the near to medium future – if ever. Also, as far as I can discover, the Rann isn’t included in the list of ecosystems regarded as “WHS gaps” by IUCN (unlike the Thar desert a bit further North - see ). In any case, becoming properly recognised in the “Man and Biosphere” program. would seem to be the next step and that appears to be stalled. Nevertheless, if you are already in Gujarat, it provides a nice wildlife viewing experience which, at its Dasada entrance, is only a bit over 100 kms by road from Ahmadabad.

Important at National level but did not meet WHS criteria