Eastern Arc Mountains Forests of Tanzania is part of the Tentative list of Tanzania in order to qualify for inclusion in the World Heritage List.

The Eastern Arc Mountains Forests of Tanzania comprises a chain of mountain ranges. They are "islands" where the tropical forests continued to flourish after the surroundings converted to savanna, fed by moisture-laden winds from the Indian Ocean. This isolation of each mountain range has led to a great deal of endemism, and a very diverse flora and fauna. The Eastern Arc is considered a gap in the coverage of WHS. 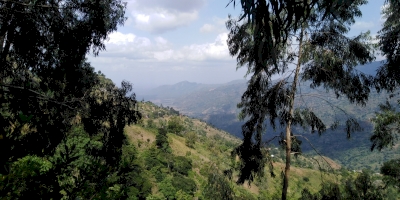 I visited the Amani forest reserve in januari 2019. I traveled by bus from the coastal town of Tanga and changed in Muheza. There is a daladala (local small bus) up to Amani around 13.00h. The daladala does not depart from the main road but a bit further. A motorbike taxi brought me to the daladala. I thought I was lucky to have caught the daladala just on time but luggage and goods kept being stocked into the daladala. It was not until 15.00h before we started moving. There was a discussion and two women were left behind, looking very upset. I just hoped the discussion was not about me for occupying their seat.

The road up was very bumpy and it seemed quite miraculous how the full daladala was able to make it's way up so steadily. Going up, the oppressive heat started to give way to a fresh coolness and a beautiful green forest.

Up in Amani, I stayed in the Amani Rest House, next to the Conservation Centre. I had contacted them before (details are on reviews on Tripadvisor). The wooden resthouse is pleasant and clean enough, just the room was not used for a long time and the bathtub was full of leaves. The one time entrance fee to the forest was USD 10 and the half board stay was around USD 20, the food was basic but plentiful and tasty. Guides could be hired for USD 15 a day but I did not use their services. There was a bird specialist staying though and he was impressed by the expertise of the local guides. I thought staying in such a pleasant surroundings, it was quite a good deal.

The village of Amani is rather big, there is an interesting historical malaria center and a park. The main tree in the village was full of toucans (I thought toucans are solitary birds but they gathered here in big groups). I sat for a while next to the road watching them.

Next few days I walked around in the hills. There are many small villages in the forest, and there are also tracks. I had no map but by just going and asking around, I could find my way back. I also walked along the main track but found there are many motorcycles and I found it disturbing. I also found large tea plantations nearby where the workers were picking the leaves. It seemed a very heavy job.

After 3 nights, I went down. As the daladala leaves at 5 am, I decided to have a leisurely breakfast and try my luck and find a motorcycle taxi. I asked around and was assured I need an experienced driver, and waited for a while for him to become available. It seemed like a good idea as I was carrying my backpack and I was quite exhausted after more than an hour on the back of a motorcycle on the bumpy track. With less cautious driver, I could have fallen off quite easily.

I continued to Lushoto, which lies in the West Usumbara Mountains. I stayed in the wonderfully oldfashioned Lawn hotel, in a budget room but the grounds are nice and the restaurant stylish, it has a colonial feel to it. It is a stop for overland Africa trips as well, but they camped in the garden and had a barbecue there, which was just as well, as this kept the rest of the hotel quiet and peaceful.

Lushoto itself is not in the forest but one can walk to the viewpoints in the forest which give a wonderful view over the plains and have a lunch at Irente farm.

I decided to go deeper into the forest and went by bus up to Mambo where I stayed in the Cliff Inn, very basic accomodation where I was the only guest. I thought it was a bit expensive but I imagined the owner has very little business. The place has no electricity but the lines do seem to get to Mambo which has few recently built high end villas. The Cliff Inn is really on the edge of the mountains and one can look down on the plains deep down and once I was able to spot Kilimanjaro just before sunset.

I walked around here too, but much of the forest is cultivated  farmland with the original trees kept to give shadow and perhaps to keep the soil from washing away. I was drawing big crowds of children here, shouting Mzungu ecstatically wherever I went, and this was a bit tiring.

I took the bus down in the morning while it was still dark. We seemed to be well on time until at some point the back suspension broke. I now understood why we had three conductors on the bus, they actualy did the repairs. A new suspension was brought by motorcycle after a few hours and after 6 hours we continued our journey. At this point many passengers had left and had found other means of transport. Now the driver refused to pick up any passengers, so we drove very speedy and quite comfortably with our fancy new suspension and reached Moshi just after dusk.