Sierra de las Quijadas National Park is part of the Tentative list of Argentina in order to qualify for inclusion in the World Heritage List. It is a proposed extension of Ischigualasto / Talampaya WHS.

Sierra de las Quijadas National Park has a long sequence of sedimentary rocks of the red bed type. Also important paleontological findings of macro and microfossils (including footprints) have been made here. Geological units include the El Jume Formation (sandstones and claystones deposited in a fluvial environment) and Lagarcito Formation (a 100-million-year-old freshwater lake paleoenvironment). 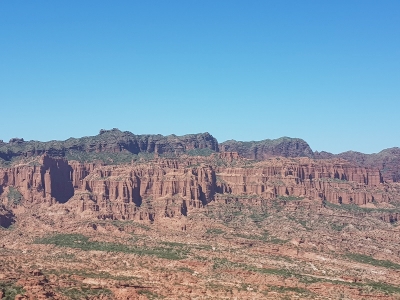