“Ciudad Perdida” comprises the ruins of a settlement of the pre-Hispanic Tayrona civilization. It was inhabited between the 9th and 16th centuries. It covers 14 hectares and includes a series of 169 terraces carved into the mountainside, a network of tiled roads and several small circular plazas. The basements of houses and temples have also been uncovered, as well as ceramic and golden objects. 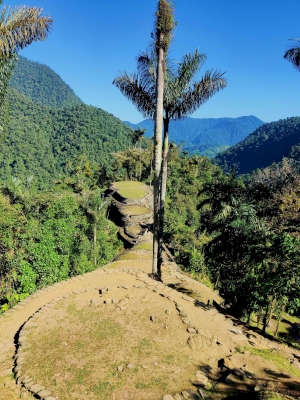 Teyuna, Colombia's Lost City, was inhabited between roughly 800 and 1650.  It was only rediscovered about 50 years ago (ca. 1973) by looters.  To get there now, you have to go on a roughly 30 mile round-trip trek, usually covering about 4 days.  The site itself covers a few dozen hectares that have been cleared away, but there is thought to be a lot more still unrestored in the nearby jungle.  The main features of the site are large circular terraces which used to hold the city's buildings. These circular terraces are one of the site's unique features. It's impressive to see how much was built here by the original inhabitants. Seeing how sparsely populated the jungle area is now, it also makes you appreciate how much bigger the population had to be in pre-Columbian times to build such a place. At the end of the trek to get there, the Lost City is 1280 stone steps up from the river.  After a set of several circular terraces at the entrance, there's another impressive broad stairway that leads to the ceremonial apex of the site.

With my guided trek, I had plenty of time to enjoy the site, and watch the morning sunlight slowly illuminate the line of terraces at the primary center. There is more to the site than the one standard photo you always see (like the one I attach) and it exceeded my expectations. The site is still used ceremonially by the indigenous people. There aren't any finer artifacts to see on the site. They were either looted, or have been taken to museums, or are still buried. But there are a couple of large boulders on-site which are covered with carved lines which have been interpreted as maps.

As with many places, getting there is half the fun.  You must go with a guide (there are a few agencies), and the trek was surprisingly difficult, with a lot of very steep up and down on muddy or rocky trails.  But I really enjoyed hiking through the tropical mountain jungle.  If you have a savvy guide, he can even point out some remnants of the original stone roads in the jungle that connected to the city, miles away from the Lost City itself, which  the original looters used  to find the ruins.

When they discovered it, the looters were able to keep it for themselves for a few years. After a feud and some shootings with rival looters, eventually the government got notified of its existence, and the government and archaeologists moved in to study and protect it.  There were a few hardy tourists who visited in the 1980s, but tourism  to the site has only really taken off in about the last 15 years, with the abolishment of large-scale narcotics trafficking in the area.   About 5 years ago, they got flush toilets and some electricity at the rest camps along the trail, which made the trek nicer than I expected in that regard.