Rani Kot is a vast fortress complex in the Kirthar Mountains in southern Pakistan. The defensive walls have a total length of 35 kilometres and the fort is considered the largest in the world. It is believed that Rani Kot was built in the early 19th century under the rule of the Talpur dynasty. 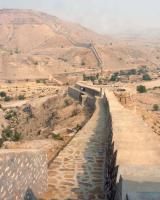