Mission Ruins of Venn's Town is part of the Tentative list of Seychelles in order to qualify for inclusion in the World Heritage List.

The Mission Ruins of Venn's Town represent the fate of freed slaves in the Seychelles and the formation of the Creole Seychellois identity. Their children were educated and Christianized here before starting a new life. Ruins of five buildings remain. 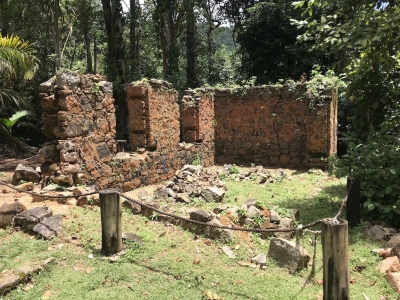 The site of Mission ruins of Venn's Town was set up in the late 19th century and its main importance lies with taking care of children abandoned on Seychelles after abolition of slavery. Children were taught Bible studies and some useful skills, such as tending to coffee and vanilla plantations. They were free to leave the institution upon turning 16. Seychelles consider this to be one of their most important cultural sites.

On the actual site there's very little that remains, mostly brick walls of the buildings and only foundation of buildings in others. There's a lovely viewing platform where HRM Queen Elizabeth II. drank tea in 1972. Getting there is easy, it's about 6 km drive from the city centre of Victoria, capital of Seychelles. There's a taxi stand cum public parkplace right off the roundabout with the clock tower (a very small one that looks like a large toy rather than a real thing) from which you could get taxi. No taxis were seen on Sunday we visited but there was one taxi at the parking place of the site. We had our own car, so getting there was no problem. About six other cars were parked at the tiny parkplace. Google Maps shows this place as Mission lodge and just marks it by the road. In reality, there's a small turn to the right and a large sign, so follow that, it will lead you to the parking place. The are is clearly marked and signposted in both English and French. It's free to enter and open 24/7.

I have to say the visit was a bit underwhelming, but then, there isn't much in Mahe Island culturally wise to do in general (if you don't count Takamaka distillery tour :) - you visit Victoria, see the Cathedral and the Market, heck, even a small stall in the middle of parking place is marked as historically important place. The way up towards the mission lodge is worth it for the wonderful views of the bay.