Teylers has been part of the Tentative list of Netherlands. 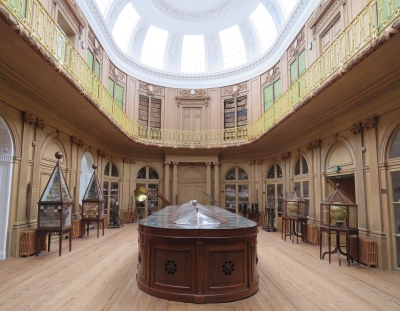 The room is full of cabinets stuffed with scientific instruments. What they are is written on small accompanying notes in Dutch and English, but how they were used remains a mystery to the visitor. This is a handicap of the whole museum: there is so little space in the 3 original rooms and the entrance hall that there is no room for interpretation.

They’ve tried to solve this issue with the Lorentz laboratory. Access is only possible by a guided tour, a few times a day with a maximum capacity of 20 people. The tour is conducted by 2 actors, who tell about the life of Lorentz and reenact some experiments. It’s totally in Dutch and mostly relies on the spoken word, so it’s not worth it for foreign visitors I believe. The most spectacular ‘experiment’ takes place at the end of the 50 minute tour: a copy of the large electrostatic generator (the original from 1784 is in the museum upstairs) is put to work to generate electrical sparks. 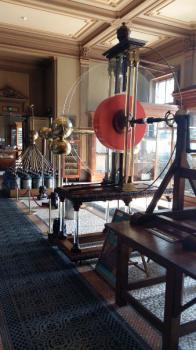 On the occasion of our WHS get together in Rotterdam, I decided to visit Teylers Museum in Haarlem. My parents recommended visiting Haarlem in general. And the logistics were good, as Haarlem is well connected with both Amsterdam and Rotterdam.

Teylers is a museum named after Pieter Teyler, a wealthy citizen of Haarlem. He died childless and donated large parts of his estate to the founding of the museum in 1778. The topics of the museum range from natural science to the arts and fit well into the age of enlightenment.

The very original (18th century) presentation of items is the key feature of the museum. I hope the linked image gives a bit of an impression.

While this may have historical or cultural value, it makes it very hard to access and enjoy the collection as a visitor nowadays. You receive very little visual guidance (where to look, what is important, some explanations). And the cabinets feel cluttered with too many objects on show. I do feel that how we present objects in museums has significantly improved since the 18th century.

The Dutch argument for inscription rests on the role of the institution in fostering science in the Enlightenment, the civilian origin of the museum and the original state of the museum. They claim this to be a first.

Personally, I found myself greatly reminded of the Franckesche Stiftungen in Halle, a civilian foundation by a childless merchant itself. The Stiftungen house the oldest civilian museum in Germany. While the exhibition in Halle is smaller and served a different purpose (school instead of science with a clear religious bent), it's still about natural science and presented in similar 18th century manner using large cabinets. Finally, Halle is older (80 years or so). Knowing that Halle is up for decision soon, the Dutch should possibly rework their nomination file a bit to strengthen their OUV claim.

Update: Teylers has been removed from the Dutch tentative list.

There are plenty of regular trains from Amsterdam. Then it's a 15min walk from Haarlem station.

All sites of the Amsterdam hotspot, specifically:

Full Name
Teylers
Country
Netherlands
Added
2011
Withdrawn
2019
Type
Cultural
Categories
You have an error in your SQL syntax; check the manual that corresponds to your MySQL server version for the right syntax to use near ') and (st.tent = 1) group by c.id, c.cat, t.id, t.theme' at line 6