National Theatre has been part of the Tentative list of Costa Rica. 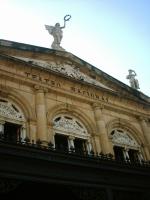 As part of the old tentative list of Costa Rica, this is a monument-based approach to heritage. But in this case, while it may not have OUV for itself, as an institution lies in the heart of national identity, in the same way that it is located next to the Culture square, the heart of activity in downtown San Jose, and an area that improved after the square (with a subterranean building for museums underneath) and the boulevard in central avenue were built. As a building, it is one of the most important landmarks in San Jose, and a must-visit place, and represents the neo-classical movement in architecture. Built between 1890 and 1897, from taxes imposed on the coffee growers after the old theater was destroyed by an earthquake, and the lack of such venues in San Jose prevented quality activities to come to the country, it was seen as a national enterprise of the highest importance.

As the National Monument and buildings of the time, it represented the ideological interests of the liberal governments of the 2nd half of the 19th century to "civilise" the populace through the promotion of inmigration and adoption of european culture, the integration of the country in the global economy of the time through trade and the building of infrastructure.

It exists in Costa Rica the idea that the theater was a copy of the Opera in Paris, but this is not the case as the only similarity comes from the programatic similarities that such buildings can have.

The theater is a very fine work of architecture, and once was said by Jacinto Benavente, a spanish writer, that San Jose was a little town around a big theater, in the pictures of the city in those times it is obvious that it was one of the most conspicuous buildings, next to the cathedral and other churches. The growth of San Jose as a metropolis has shrunken the theater, but its central role in the culture of the country is maintained and high resources were spent for its renovation and other works (fire preventing, etc) since the building was severely damaged by a series of earthquakes in 1990-1991, it was reopened for its centennial celebration and just recently the cupola, a landmark on itself, was restored to its original appearence and red color. By now, it has underwent 20 years of renovation that have left it at its upmost stare probably since it was built.

Great artists have passed by its scenery, such as Anna Pavlova, nobel winning writers, fine works of art and artistry are housed within it (including a fresco that appears in the old costarrican 5 colones bill, named one of the most beautiful bills in the world years ago) and while it is obvious it will never be a WHS, probably the main fact around heritage is its belonging to people and in this case, that requirement is fully accomplished.