Cultural Landscape of Salt Towns has been part of the Tentative list of Colombia.

The Cultural Landscape of Salt Towns is located in a former sea bed where salt deposits remain. Salt was mined here already long before colonial times by the Muiscas. After the arrival a more industrial approach was taken, the current mine complexes date from the 19th century. The landscape comprises the towns and mines of Zipaquirá, Nemocón and Tausa. 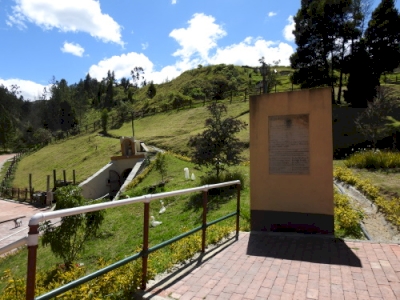 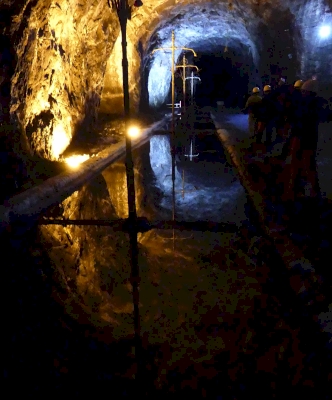 Imprisoned in a Salt mine!! We only had 2 experiences in Colombia where we had to join a group tour – visits to Guatavita Lake and to Nemocon mine. BOTH suffered from an incredibly long-winded tour experience. This was not due to our problems with Spanish – the Nemocon tour was in (semi) English and the Guatavita tour Spanish was adequately understood by us. No, it appears that Colombians expect a good long outing when they pay for a guided tour! Our Nemocon tour lasted almost 2 hours and could have been perfectly well covered in 1!!

Out of the 3 Salt Towns included in this T List site we had originally intended visiting that at Zipaquirá for no better reason than it was on our direct route back to Bogota. It is also by far the most frequently visited, being an easy day (or even afternoon, if you have your own transport) return journey from Bogota. It is particularly famous for its underground “Salt Cathedral”. For some unknown reason however the mine decided to close on the day we were due to visit and, rather than swap dates, we opted to visit the mine at Nemocón instead.

It is noteworthy that the site is listed as the “Cultural Landscape of Salt Towns” which implies that it is intended to cover rather more than a mine in each town. There are indeed a few elements mentioned in addition to the mines themselves – at Nemocon, excavations have uncovered pre-Spanish remains of salt working by the indigenous Muisca people and again at Nemocon, mention is made of “Furnaces for artisanal salt processing” of which just 1 remains “… located north of the town of Nemocón, about 500 meters from the main square.”. These few “visible traces of these salt processing ancient practices” hardly seem to add up to a viable “Cultural Landscape” when put together with the 3 mines and another element mentioned at Nemocon – “Nemocón Salt Museum - …… currently located at the former Casa del Encomendero, the oldest building in the town, located east in a corner of the main square”. We visited an institution called the Nemocon salt museum” but it was situated inside one of the buildings of the salt mine itself.

This museum explained perfectly adequately, with partial bi-lingual notices, the geological reasons for presence of the salt and the history of its extraction – from pre-Colombian times when it was a valuable product as well as a medium of barter for the Muisca in return for the gold their lands were not particularly well endowed with. The Spaniards immediately recognised the value of the product and installed their own harsh labour system. Production continued with improvements in technology across the years until around 1973.

We were quite pleased when we had to decide between Zipaquirá and Nemocon – it appears that the famous “Salt Cathedral” at Zipaquirá is a “reproduction” as the original was regarded as unsafe so, as their income depends on having a “Cathedral cave”, they dug another one! It sounded very touristy, whilst Nemocon appeared more “authentic”. But our visit didn’t start well - we were asked to wait for 30 minutes for an English speaking tour and visited the Museum finding it quite interesting. After 40 minutes, however, it became clear we were being scammed. We eventually started after 50 minutes when a mixed language group eventually turned up. Our guide was not a particularly good English speaker and insisted on asking everyone in the group their names, nationalities, what they had had for breakfast (well almost!). We went through the museum again and he “explained” things which were perfectly well explained by the info boards. But he insisted on running it as a quiz. “Does anyone know why…..?" For God’s sake get me out of here!!!! I understand that visitors to Zipaquirá are issued with audio guides though whether this enables them to fully "escape" the human guide's spiel I don't know - it sounds to be a good start though!

We were eventually taken into the drift mine with an inordinately long delay for kitting us out with helmets. Underground could have been interesting if taken at a reasonable pace, but again it was all SO SLOW. Some of the salt formations and the underground reflecting pools (photo) were nice to see (except that we all had to guess how deep they were). We were also treated to a church area (You’ve got to have a church and religious statues in a touristy Salt mine!), a heart shaped crystal where one could renew one's vows with /express undying love for, one's partner, a plastic model of Von Humboldt, a series of salt statues where we had to guess what animal etc they were etc etc. Then much time was spent on the set and seeing helmets signed by the stars for the movie “The 33”. By this time I was near screaming point.

Now, we have visited almost all the WHS which provide the opportunity to go down a mine. In our experience, each places itself somewhere on a spectrum between tourist “wow” attraction and industrial archaeology site – Nemocon aims far too much at the former. We were pleased to get out. Whether there was more to see on the external “cultural landscape” aspects I don’t know – by the time we got out there wasn’t time to find out!