Church of Orosi has been part of the Tentative list of Costa Rica.

Map of Church of Orosi 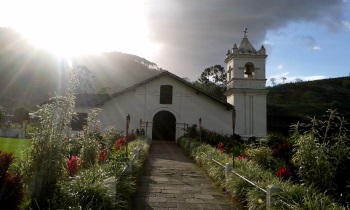 When the Spaniards discovered the territory of modern day Costa Rica, they initially preferred to stay in the coast. When they decided to penetrate into the rugged, mountainous territory, they entered the Reventazón River valley into what is now the province of Cartago. There, they found a series of indigenous towns, as Uxarrací (later Ujarrás) and the town of cacique Xarcopa that reigned from the town of Orosi. When the Spaniards colonized the area, they established in these areas the indigenous towns, known as encomiendas, and in them, a Franciscan monastery and a church in from of a town square or plaza, in a pattern repeated throughout the colony. This was the case of Orosi, which rapidly excelled in its agriculture, and managed to upgrade the religious buildings in 1767 from organic materials and a straw roof, to adobe buildings with a tiled roof.

Today, besides the church, its imposing bell tower and its adjacent monastery, there is little left of that society or the colonial buildings, Orosi has become a town dedicated to export agricultural products, and services, but even when nothing is left from the dwellings, the form of the town, perching from the neighboring elevations into the course of Grande de Orosi river give it a picturesque nature that almost no town in the country has. As said about the Ruins of Ujarrás, their proximity and location inside a valley of great visual, cultural and natural interest, with its colonial remains, terraced fields, rivers, lagoon and variety of attractions, make it probably one of the few cultural landscapes in the country to retain some degree of integrity.

Around the church, while it may be an extremely unique example of colonial architecture surviving into modern times, its simple architecture wouldn't have by itself an OUV, except in the case that it would come in a serial nomination with the valley or with other colonial sites in Costa Rica. However, this church as a sighting definitively is worth the visit, and in its simplicity, guards a valuable series of religious imagery and rests of the colonial times in what used to be the monastery. The buildings themselves are still regarded in the community as elements of their legacy and are part of the common tourist routes in the country, in the whole of the landscape of Orosi valley.