Rila's monastic buildings originally date from the late 10th century and were set up by the monastic community around the medieval hermit Ivan. He chose seclusion because of the moral decline during the reign of the Bulgarian Tsar Peter. He retreated to the almost inaccessible Rila Mountains.

In the 14th century, the buildings were turned into a fortress by Hrelyo Dragovol, a feudal lord. Part of the walls and the tower today still remind of that period. On January 13th 1833, a fire broke out and destroyed almost all (wooden) residential quarters. This national calamity was put right by thousands of Bulgarian craftsmen, that restored the buildings in a couple of years. 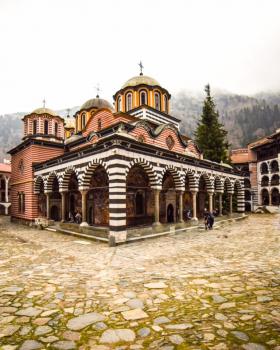 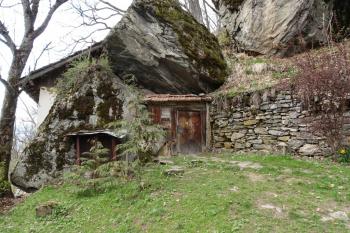 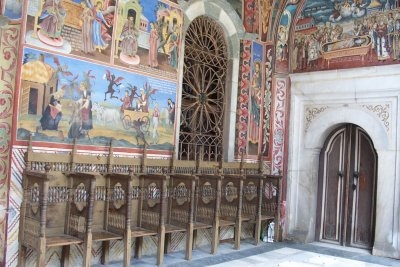 Inaccessible for the medieval man, still a time-consuming trip for the modern traveller. From Sofia it takes almost all day by public transport to get there (and back), so I decided to be clever and rent a car. And this also took me the best part of the day....

Driving in Bulgaria means escaping the potholes in the streets, pedestrians crossing 'the highway', circling around the ubiquitous horse carriages, dead dogs and other runover animals. This can be fun, but what they add is totally erratic signposting. Although I had a detailed road map in Cyrillic, I took the wrong way seriously three times. In all, it cost some four hours to arrive at the monastery 120 kilometers from Sofia. What a day...

Here the lamenting stops: because it was worth all the trouble. Rila's is the most awe-inspiring, colourful and eccentric monastery I have ever been to (and I've seen many). Its location, in the dark green forests and with snow-clad mountains in the background, couldn't be better. The outside walls are a bit bleak, but entering via the Dupnitsa-gate, my mouth fell open taking in the spectacle. I can't begin to describe the colours, the frescoes, the architecture, and all the details, but I hope I can give an impression via the pictures on this site.