Lalish Temple is part of the Tentative list of Iraq in order to qualify for inclusion in the World Heritage List.

Lalish Temple is the spiritual center of the Yazidi religion, and a place of annual pilgrimage. It is the location of the tomb of the Sheikh Adi ibn Musafir, a central figure of the Yazidi faith. Yazidism is one of the oldest Eastern religions. The temple complex is rare in its architectural style, with incorporated ancient symbolism such as its conical domes (representing the sunrays) and the image of a black serpent next to its entrance door. 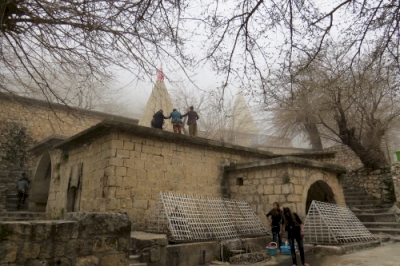 Lalish Temple, the holiest place for the Yazidi community, has been added to Iraq’s Tentative List last week. It was one of my proposals for the Arab States Top 50 Missing, so I was very happy to see it appear in the official records as well. My support for Lalish stems from my visit to the site in March 2014. It was the highlight of my tour through Iraqi Kurdistan: an introduction to one of those mysterious, small Middle Eastern religions that somehow in isolation have survived for centuries. Only 5 months later the rest of the world came to know the Yazidis as well, however in much more unfortunate circumstances – as victims from the Sinjar massacre and the genocide of Yazidis by ISIS.

Lalish lies about an hour's drive from modern civilization (we left from Duhok). Unfortunately the place was covered in a dense fog when we arrived – apparently it has a lovely setting in a mountain valley. The rituals that are so abanduntly attached to this holy site already start when arriving in the main street leading up to the temple: even in the streets you can only walk barefoot. Socks were also allowed for us tourists, fortunately, as the ground was quite cold.

We were met by a local guide, a young boy who spoke English quite well. He is a member of one of two families who live permanently in Lalish. These families also supply the holy men of the religion of the Yazidis - his uncle is one of them. The Yazidis follow their own ancient religion, only marry within their own faith and are not popular with their Muslim neighbors – they have been persecuted since Ottoman times. The temple includes the tomb of Sheikh Uday bin Musafir al-Hakari (1072-1162), their most revered holy man and incarnation of the “Peacock Angel” (I’ll stop here in trying to explain the Yazidi religious beliefs, they are hard to grasp for the uninitiated).

We visited on a holiday and Yazidis had come from far to visit the temple. You can have your child baptized there. Or pray for happiness by tying a knot in one of the multicolored cloths that cover the saint’s tomb. Olive oil plays an important role in the Yazidi religious experience. It is produced locally: there are olive trees in the surrounding villages. After treatment by one of the holy men, the oil becomes medicinal. In the interior of the temple, many barrels are stocked with the product (and the floor is sticky due to the oil residue). Believers dab some oil where they need healing, we saw one putting it in his ear.

We had now arrived in the most mystical part of the complex, a cave with blackened walls. There is another activity here that hardly anyone misses: the idea is to throw a red cloth on top of a ridge in the cave. You can try three times, just like at a funfair. If you succeed, you can make a wish.

The architecture and design of the temple is uncommon as well. What you see nowadays is not that old (there have been many reconstructions). The main temple is a rectangular stone building, with conical domes on top. These particular domes represent sunrays touching down on earth. On the day that I visited they provided a beautiful backdrop for partying youngsters - accompanied by music from their phones, a group of boys danced around one of the domes in a circle.

The temple walls are decorated with carvings and inscriptions of which the meaning often has been lost over time. The gray marble doorway to the temple is the aesthetically most pleasing element. To the right of the door is a representation of a black snake: this refers to the Yazidi legend where a black snake plugged the hole in the Ark, preventing Noah from drowning.

In conclusion: Lalish Temple is quite incomparable to other WHS, both in its architectural design and its spiritual value. Iraq's tentative OUV statement highlights the old age of the Yazidi religion, graduating "from natural worship to monotheism and has its own beliefs and rituals that differ from the Abrahamic religions..... The Yazidi religion remained steadfast, despite its exposure to campaigns of skepticism, accusations and slanders".