Viñales Valley is a living cultural landscape where traditional agriculture is practiced.

Due to its fertile soil and favourable climate, farming started here in the 17th century. It got a boost in the 1860s because of the rise in tobacco cultivation, which still is the main crop.

The valley lies in the western Cuban province of Pinar del Rio. This is a karstic depression, a plain surrounded by cliffs up to 400m high rising like islands from the bottom of the valley (the mogotes). The cliffs hold numerous caves such as Cueva del Indio, Cueva de San Miguel and Caverna de Santo Tomás. Inside there is dripstone and rock art. The natural flora and fauna is characterized by many local endemic species. 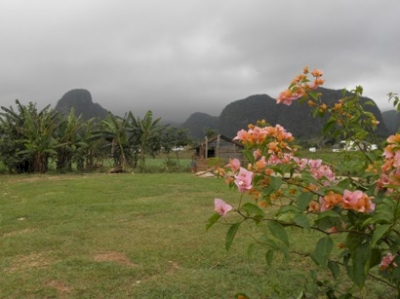 In hindsight, this was the area of Cuba that I liked best. Especially its natural surroundings. Surely I had seen a karst landscape or two before, and the size of this is no match for China's Yangshuo/Guilin, but "diving" into this valley by road is a spectacular sight. Its little hills, tobacco plants and colourful flowers do add an extra touch to the standard Cuban landscape of banana plants and royal palms.

Another thing that sets Vinales apart is that it is such a small town, just pottering around a bit far from the rest of the action of Cuba. It's a totally relaxed place. The town's inhabitants seem to have completely surrendered themselves to tourism. About 80% of the houses are in use as Casas Particulares. The rest sell drinks, food, or souvenirs. Large touring cars travel on and off through the town's main street, delivering more tourists (including day-trippers from Havana or even the beach resorts).

To see the valley's main sights, I joined a bike tour. Although the valley is only 12km long, I found it quite a tough ride. Cuban-made mountain bikes aren't the most comfortable in the world. And those nasty mogotes! Annoying little hills always involve a steep climb. On the way back we also had the wind against us. So I am not ashamed to say that I walked a fair bit of the last 5 km.

Part of the tour was the obligatory visit to a tobacco farm. I had not seen tobacco fields before and found it interesting to hear about the delicate and time-consuming process that involves tobacco growing. The other sights in the valley aren't much, though from a distance the quite tacky Mural de la Prehistoria is not bad at all.

Accorfding to UNESCO, Vinales is on the list because "traditional methods of agriculture (notably tobacco growing) have survived unchanged there for several centuries. The region also preserves a rich vernacular tradition in its architecture, its crafts, and its music." Unfortunately these are the kinds of qualities that are not always easily discernible to the passing tourist as I was in 2001 when I visited. It is set in a Karst landscape that was visually intersting - but that was before I visited Halong bay and the Gulin/Yangshuo area of China. My friends and I had a pleasant stop there at a local homestay, where we had the best food we ate in Cuba (not much competition though I'm afraid). If you have a particular interest in

Cuban culture, tobacco growing, or are passing that way anyway, Vinales town is worth a stopover, but I wouldn't plan a holiday around it.

Vernacular architecture: "Most of the buildings scattered over the plain are simple; they are built using local and natural materials, and are used as homes or family farms."

Maroonage: Slaves from Africa worked on the crop fields here. Also, escaped slaves often found refuge in the caves of the Valley. The Pan de Azucar site contains the ruins of the biggest hacienda, where slaves were taught different trades.
Tobacco
Coffee: Coffee is among the crops grown

Built in the 19th Century: "Les activites economiques et socio-culturelles demarrent aux XVIIe siecle...La culture du tabac fait ensuite son apparition, devenue la principale activite economique " (Nom file) .."The area was colonised at the beginning of the 1800s by tobacco growers from the Canary Islands.. The first settlement in Vinales is documented in 1871, in the form of a ranch .. The town was established in 1878 as a typical community, with church, school, hospital and recreation park" (Wiki) "Visit to EL Palenque de los Cimarrones, a place where a runaway slave's hide-out is recreated and you learn about afro Cuban religion & the history of the slaves in the 19 century" (tourism web site)

Rejected, and then inscribed
Cultural sites rejected for Natural criteria
Inscribed on a single criterion only: iv. to be an outstanding example of a type of building, architectural or technological ensemble or landscape which illustrates (a) significant stage(s) in human history