Shark Bay, covering 23,000 square kilometers, is an area of major zoological importance and home to about 10,000 dugongs (sea cows) and many dolphins.

The area supports 26 threatened Australian mammal species, over 230 species of bird, and nearly 150 species of reptile. It is an important breeding and nursery ground for fishes, crustaceans, and coelenterates. There are 323 fish species, with many sharks and rays. 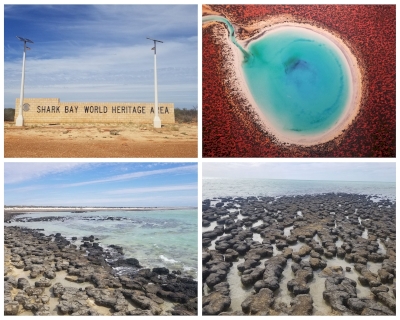 If you got the money you can fly directly into Shark Bay, stay at Monkey Mia and see the dolphins. Check. However, the dolphins are the worst part of Shark Bay and only keeps mainstream tourists coming. Most of Shark Bay is hard to get to though, with off-limit islands and a strictly protected marine park. So it's not easy to appreciate this area. You can go to the lovely heritage museum for tons of info on the area: why it's UNESCO, what kind of unique things there are to see, and there is also a small cinema to watch a movie but I didn't stick around for that. I was also the only person in the museum the entire so I guess this place isn't so popular around non-holiday periods.

I actually drove up from Perth and combined this with several sites on the coast, including Ningaloo Coast further up north. I remember trying to fly to Exmouth and drive form there but the mileages was so limited, not unusual for smaller town rentals around Australia including Darwin, that it wasn't going to work out. The drive up from Perth is quite long.

As I was purposely avoiding the dolphin encounter I had to do with just stopping at the coast sites and look around. No mammals or birds in sight. My rating for the site is thus a little lower than it probably is worth because on paper this place sounds great, with tons of animals in the bay. While there is scuba diving it is very expensive and I was already going to go diving at Ningaloo shortly after so I made the choice to do the latter for a lot less $$$.

Travelled to Shark Bay on a 4WD backpackers tour up the west coast of Western Australia from Perth to Coral Bay in April 2002.

The most publicised aspect of Shark Bay is the Dolphin feeding at Monkey Mia however I found it personally dissapointing. The half hour "show" involves three rather domesticated dolphins. Much rather see dolphins in the wild.

Some of the coastline contrasts dry red and ochre cliffs with turquoise blue waters.

A good place to stay is at the camping ground at Nanga on the freycinet Peninsula.

Turtles and tortoises: Loggerhead turtle nest on the beaches
Salt Flats: The inland terrestrial landscape of Shark Bay is predominantly one of low rolling hills interspersed with birridas (inland saltpans that are at sea-level)
Lagoons: Shark Bay's "attractions are also supplemented by secondary features such as Shell Beach, Big Lagoon and the Zuytdorp Cliffs which combine to add even further interest to the area"
Living Fossils: Stromatolite
Whales: humpback whales
Living Stromatolites: one of only two places in the world (the other being the Bahamas) with living marine stromatolites
Siraneans: Dugongs
Ratites: emu
Sharks
Critically endangered fauna species: Great hammerhead

Indian Ocean
Located at an 'extreme point' of Latitude or Longitude : Steep Point is the westernmost point of the Australian mainland
Cape: Cape Peron

Castaways or shipwrecked mariners: In 1841 the Pers?v?rant, a French whaler, was wrecked on Dirk Hartog Island "The 25-man crew struggled to Cape Levillain, on the northern tip of the island, where they camped in the sandhills for ten weeks. Five men died of scurvy and are buried on the island, but the others sailed four whale boats on a treacherous ? and to some, fatal ? journey to Indonesia. Archaeologists have discovered brass buttons, glass, ceramics, clay pipes and other artefacts at this camp site."

Holocene: Later, a rise in sea levels during the Holocene epoch (the most recent 10,000 years) flooded the region and created Shark Bay's unique double-basin form.