Babylon is the archaeological site of what once was one of the largest and oldest settlements in Mesopotamia.

It comprises the – largely unexcavated - remains of the ancient Neo-Babylonian city, its city walls and temples. Particularly during the reign of Nebuchadnezzar II (604–561 BC)  the complete reconstruction of the imperial grounds, including the Etemenanki ziggurat, and the construction of the Ishtar Gate took place. 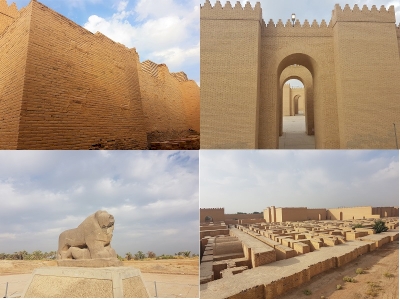 Babylon is the ruin of the capital of the kingdom of Babylon, a country that had enjoyed its heyday since the time of Hammurabi (18th century B.C.E.). The golden age of the development of the city of Babylon fell during the time of King Nebuchadnezzar II, who ruled from 605 to 562 B.C.E. and significantly expanded Babylon, including building the magnificent Southern Palace.

After paying 25 thousand dinars I got a guide who showed me around the complex. The guide was incredibly nice, but his English was rather poor and he had a hard time explaining the historical or architectural complexities. Despite everything, he tried and told a lot, and what I heard was not necessarily pleasant to Polish ears. He worked here during the occupation of these areas by the allied forces (do you remember "Camp Babylon"?) and he cannot say anything good about this occupation. According to him, soldiers did not respect the monuments, treated them carelessly, and even deliberately devastated or took some artifacts - unfortunately, independent sources confirm what he said. On the other hand, he spoke positively about the Polish soldiers who gave him food and healed his seriously ill daughter at a time when it was extremely difficult to find a normal doctor. Apart from the purposefulness of the war itself, I do not understand why the main military camp of the occupiers had to be located next to a place of such great historical importance. Fortunately, Camp Babylon lasted "only" less than two years, and was relocated to less controversial sites in late 2004.

I have mixed feelings about the complex itself - despite being aware of the importance of Babylon as a historical site, I believe the reconstruction has gone too far here. The fact is that some of the relics were taken outside Iraq - for example, the original Ishtar Gate is on display at the Pergamon Museum in Berlin. Babylon was the apple of Saddam Hussein's eye, who, despite the historical integrity of the place, commissioned the reconstruction of most palaces - in general, you can see with the naked eye that the original walls account for about 5-10% of the total. Saddam put his initials on most of the bricks that were added. Fortunately, you can find places that were certainly original, including the relief-covered walls of the passage that ended at the Ishtar Gate. The reliefs depict Mušḫuššu - one of the main deities of Babylon - a creature with a serpent's head, a fish's body, two eagle legs, two more lion, a serpent's tail and a scorpion's venom spike.

Regarding Saddam, the dictator was so fond of Babylon that he placed one of his palaces on a nearby hill, clearly visible from the ancient city itself. The palace is abandoned today, but it can be visited, which I did not take advantage of, because that day I had a long way to go.

Babylon is one of the most popular tourist destinations in Iraq, one of the few that can be visited without the help of a tourist office. It is about an hour and a half from Baghdad, you can talk to taxi drivers who will take you there for $ 100. I paid $ 300 for an 800km trip to Babylon and Ur (WHS Ahwar of Southern Iraq), back to Baghdad on the same day.

Destroyed during invasion: Babylon was severely damaged during the 2003 invasion of Iraq and the occupation by military units of the Coalition Forces: "The use of Babylon as a military base was a grave encroachment on this internationally known archeological site".

Mesopotamia: Babylon was a key kingdom in ancient Mesopotamia from the 18th to 6th centuries BC. (wiki)
Excavated by the Deutsche Orient-Gesellschaft: DOG undertook excavations in Babylon from 1899 to 1917, directed by Robert Koldewey, uncovering the Ishtar Gate, the palaces of Nebuchadnezzar, and the Hanging Gardens of Babylon. Koldewey also claimed to have discovered the Tower of Babel. (wiki)
Babylonian Empire
Achaemenid Empire: Under Cyrus and the subsequent Persian king Darius I, Babylon became the capital city of the 9th Satrapy, as well as a centre of learning and scientific advancement. In Achaemenid Persia, the ancient Babylonian arts of astronomy and mathematics were revitalized, and Babylonian scholars completed maps of constellations. The city became the administrative capital of the Persian Empire and remained prominent for over two centuries.
Amarna Letters: Karduniaš, ... is a Kassite term used for the kingdom centered on Babylonia and founded by the Kassite dynasty. It is used in the 1350-1335 BC Amarna letters correspondence. (wiki)
Specified on Herodotus' Oikumene

Gertrude Bell: In January 1909, Bell left for Mesopotamia. She visited the Hittite city of Carchemish, mapped and described the ruin of Ukhaidir, and continued to Babylon ... (wiki)
Alexander the Great: According to a Babylonian astronomical diary, Alexander died between the evening of June 10 and the evening of June 11, 323 BC, at the age of thirty-two. This happened in the palace of Nebuchadnezzar II in Babylon. (wiki)

Mentioned in the Bible: Various places, including Genesis 10:10 "The beginning of his kingdom was Babel, Erech, and Accad, all of them in the land of Shinar."
Goddesses: Ishtar Gate: dedicated to the Babylonian goddess Ishtar

Excavated by Centro Scavi Torino
Archaeological potential: the large majority of the property remains unexcavated and retains a significant potential to provide knowledge based on the yet unaltered and unexcavated remains (AB ev)
Astronomy and Astrology

Built in the 7th century BC: "The key period of Babylon, however, began in 626 BCE, when Nabopolassar rose to power (626–605 BCE) and especially under his successor, Nebuchadnezzar II (604-562 BCE), who created a vast empire, making Babylon a significant capital." (AB ev)

Former Largest Cities: It has been estimated that Babylon was the largest city in the world c. 1770 – c. 1670 BC, and again c. 612 – c. 320 BC (wiki)
Located in a Former Capital: Babylon was the capital of the Neo-Babylonian Empire
In the Pergamon museum: Ishtar Gate
In the Istanbul museum: The Istanbul Archaeology Museum has lions, dragons, and bulls from the Processional Way to the Ishtar Gate (wiki)
In the British museum: Babylonian Map of the World
Location for a classic movie: Intolerance (1916, preserved at the United States National Film Registry)
Underground Boundaries: • " In response, the State Party submitted a new, three-dimensional boundary concept on 25 February 2019. In this revised delimitation, the outer boundaries remain identical while a number of 20th century constructions have been excluded above-ground – thereby becoming islands of buffer zone within the property – while potential or known archaeological resources below these remain explicitly within the property. Excluded are numerous areas including the three artificial hills with Saddam Hussein’s palace located on the westernmost side, the contemporary village housing located within the property, individual government buildings such as the police headquarters and conference centre, as well as manifold others..." (Advisory Body Evaluation, 2019)
Marvel Cinematic Universe: Eternals (2021): Ishtar Gate, Hanging Gardens of Babylon

Seven Wonders of the World: The Hanging Gardens of Babylon was one of the Seven Wonders of the Ancient World, although a number of scholars believe these were actually in the Assyrian capital of Nineveh. (wiki)
Part of Our Top 50 Missing: As "The Sacred Complex of Babylon" (no. 32)
World Monuments Watch (past): As part of 'Cultural Heritage Sites of Iraq'(2006, 2008)
U.S. Ambassadors Fund : 2 million USD grant in 2010

Ten years or more to inscribe: 1983-2019
Reconstruction regarded as unsatisfactory by UNESCO or ICOMOS